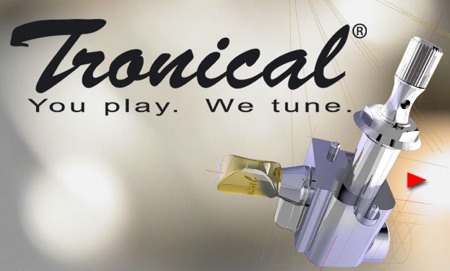 Remember this post I made about Transperformance self-tuning guitars?

Well, there’s another player in the self-tuning field: Tronical.

Have a look here to see a vid of the Tronical system.

It’s apparently going to cost around £460, will support alternate tunings and doesn’t require heavy modification so it won’t ruin your existing guitar tone.

The price is coming down… how long before someone like Line6 incorporates self-tuning into their Variaxes? Or someone more cheap and cheerful like Behringer?

I’m guessing that in five or ten years, guitarists will consider hand-tuning old-fashioned. 😀

And how is this going to affect the sound of indie bands? Can you imagine perfectly in-tune twee indie guitars?

Hi Jyoti,
Good concept regarding the self tuning guitars but 2 things spring to mind….

1. The extra mass at the headstock end of guitar will make the guitar feel quite odd for some people, especially if it was fitted to a light-ish bodied guitar like a Danelectro or a semi acoustic. It is proven fact that more mass at the headstock end increases the sustain and therefore the characteristics of the guitar change quite dramatically. There is actually an after market product which caters for this phenomenon.

*If the guys involved in this project know anything about tuning they will know that the guitar is not a perfect instrument that will never actually perfectly play in tune, especially when playing an ‘E major’ chord because the first fret does not intonate perfectly for a G string! There are people who have tried to tackle this specific problem:

and the scale length revision of Buzz Feiten.

But in a nutshell he really should have picked a G major chord or something which doesn’t involve using the g string stopped at the first fret or 2..