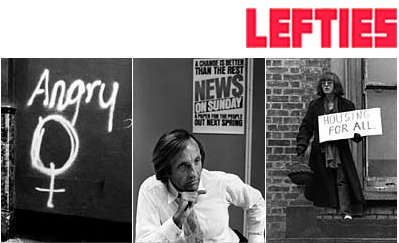 Although I didn’t join the Militant Tendency till the ’80s, I easily recognised the characters and attitudes on the BBC4 documentary. The gaggle of Trots, anarchists, neo-Reichians, radical feminists and general lovely troublemakers were all familiar to me. They reminded me of the people I was once proud to call my comrades.

The apolitical amongst you reading this will already be forming a dismissive sneer. Politics is sooo 20th century, after all, innit?

But don’t worry, this won’t be a rant about how things were great in the ‘good old days’ and bloody kids nowadays have no idea. I know that to be false since within the last three years, I’ve marched alongside some of the most politicised, fired-up people I’ve met in my entire life. And a lot of them were under-25. There’s a fire there that I recognise, a desire for justice, freedom and equality that’s been part of humanity since way before capitalism existed. And it’ll still be there long after it’s a dim memory. These kids are direct philosophical descendents of the starry-eyed lefties in the documentary: positive, optimistic activists.

Conversely, I also know whole swathes of people who think of nothing more than their next spliff or next pint. They live on an animal level, never looking higher than their heads, never realising there’s a universe to explore and understand. Never truly living. Life should be more than fucking, shitting and eating. It’s these people who use phrases like “some of us have to work you know” or “he thinks too much” or “it’s alright for some.”

If you don’t think, what’s the point of being here? If you don’t question everything, how can you be alive? And yet the middle-class drones, the sheep, the Tories always seem immensely proud of their lack of thought. They’ll boast about how much they don’t read, how little they understand, how rarely they form an original thought. This attitude is, of course, a shadow of the fascists’ hatred of intellectuals.

The thing that stood out about the documentary was how alive those lefties still are now. Most of them are still, in their own way, carving out their own lives and in some way trying to change the world. And even the couple who’d given up on the politics still seemed ruefully cheerful, perhaps realising they’d got sucked too far into the system they used to oppose.

If you’re a woolly spiritual type, you’ll attribute their demeanour to ‘character’ or ‘aura’ or some such bollocks. The truth is that these people taught themselves about the world in which they lived: its political systems, its economic systems and their place within those institutions. They were hungry to learn about everything, to analyses their reality at a deeper level than the idiocy that poses as ‘common-sense.’ They struggled to understand. This struggle may not have changed the world, as they hoped, but it changed them.

I’m not saying everyone has to go out and read The Transitional Programme. I don’t believe that one can attain individual freedom by following a cookie-cutter mode of thought. It’s the questioning that’s the foundation of freedom. Perhaps that’s why, even though I’m a radical atheist, I’ve always got on with religious people. Though I disagree with them, they’ve asked themselves the essential questions: why am I here? What should I do with my life? What’s the point? Of course, I differ entirely in my answers. 😀

It’s the question that starts your journey: when you see people starving while the West destroys surplus food, when your state wants to surveil every moment of your life, when your government asks you to die for it in a foreign desert. Do you bow your head and obediently follow your masters’ orders? Or do you wake up and ask: why?

That one word is the first step.