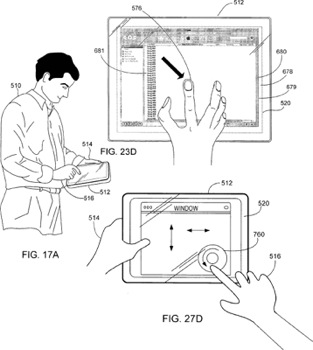 Via Engadget, it appears that Apple are patenting designs for a new touchy-feely tablet interface.

(Allegedly) The new interface / display will let you use motions, gestures and multiple touchpoints to interact with your future Mac. Sounds a little bit like this: 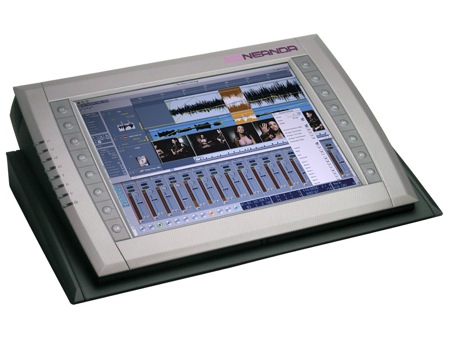 That’s a Neanda touchscreen. It’s optimised for pro-audio work. Of course, it’s only a touch display, not an entire tablet computer like Apple’s new jobby will be (I hope).

What would be really nifty is if they can find some way of making touchscreens extrude controls or at least simulate them by perhaps ultrasonically vibrating parts of their surface? Imagine a tablet Mac that, when you’re using Word, pops up a keyboard on the screen. But when you switch to Pro Tools, those keys sink back down and are replaced by faders and pan pots. The extrusion wouldn’t have to be much, maybe a 2mm or so bevel but it would make using touchscreens far more intuitive and fun. I’ve tried typing on touchscreens and it’s a haphazard and slow process due to the absence of tactile feedback.

Where is my roll-up, memoryplastic computer? I want it NOW!

Tony Blair told President George Bush that he was “solidly” behind US plans to invade Iraq before he sought advice about the invasion’s legality and despite the absence of a second UN resolution, according to a new account of the build-up to the war published today.

A memo of a two-hour meeting between the two leaders at the White House on January 31 2003 – nearly two months before the invasion – reveals that Mr Bush made it clear the US intended to invade whether or not there was a second resolution and even if UN inspectors found no evidence of a banned Iraqi weapons programme.
(Source: The Guardian)

So all of that posturing, all that bluster about Iraq “ignoring the UN” was hollow? What a surprise!

The illegal invasion of Iraq was a done deal. Blair committed this country to the bloody slaughter currently taking place with a barrage of disinformation, spin and outright lies. Here’s another telling nugget:

Mr Bush told the Mr Blair that the US was so worried about the failure to find hard evidence against Saddam that it thought of “flying U2 reconnaissance aircraft planes with fighter cover over Iraq, painted in UN colours”. Mr Bush added: “If Saddam fired on them, he would be in breach [of UN resolutions]”.
(Source: The Guardian)

In other words, there’s no evidence of Iraq being a threat so let’s provoke them into an attack. Then we can kill them and claim self-defence.

And these men still lead their countries?

Bush, the great strategist and renowned intellectual, saw no problem with flattening Iraq and destroying what civil infrastructure existed:

Mr Bush told the prime minister that he “thought it unlikely that there would be internecine warfare between the different religious and ethnic groups”. Mr Blair did not demur, according to the book.
(Source: The Guardian)

Well done, George! You’re a visionary! Look at Iraq today – it’s a calm haven of liberated democracy, thanks to your inavading army of torturers and kiddie-killers. Truly, “mission accomplished.”

Please read the full article for further revelations, including dates when Blair lied to Parliament, assuring them and this country that the diplomatic process was still open.

And all the time, the war was a foregone conclusion. One hundred thousand Iraqis dead, one hundred British soldiers dead, all for Bush and Blair’s insane crusade for oil and power.