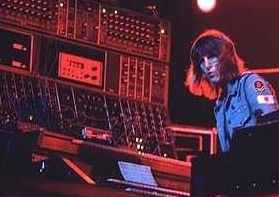 Over the last few months, since playing live again, I’ve had this growing feeling. And now I can put it into words:

I want to join a prog band.

As you may know, I’m rubbish on guitar. But I’m excellent on synths, both programming and playing them. Sometimes, I’ll just sit round idly soloing through fractured pentatonics at ridiculous speeds, wishing I had somewhere to share my widdling with the world. Then I realised – PROG! I want to play enormously widdly synth solos in a prog band. Perhaps with one of the oscillators tuned up a fifth? 😀

I want to play for fun so it’d have to be a proper prog band, not some postrock atrocity of chin-rubbers making “challenging” music (which inevitably means ripping off Godspeed forever) nor mathrock which is far too serious and c(o)unty. Ideally, I’d be stationed in front of a wall of modular synths. We’d have songs about jesters, intergalactic space gypsies and obscure 18th century art movements. Each song would be at least five minutes long and feature perhaps two bass solos. We’d have a spoken word piece performed by an achingly beautiful actress that documents the journey of a comet through the Oort Cloud. Proper prog!

Eventually, I’d turn to Eastern mysticism (pretty easy for me, admittedly) and retreat to somewhere in the Home Counties where I’d form my own ashram of devotees. There, guided by the stridulations of my massed synthesizers, we’d chant into the night, healing the cosmos with our charmed vibrations.

But that all comes later. First I want to prog out!

Anyone got a spangly cape in my size?