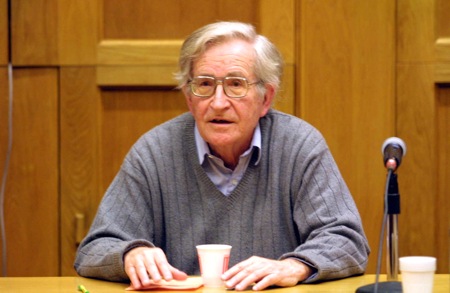 You can measure the number of terrorist attacks. Well, that’s gone up sharply under the Bush administration, very sharply after the Iraq war. As expected — it was anticipated by intelligence agencies that the Iraq war would increase the likelihood of terror.

And the post-invasion estimates by the CIA, National Intelligence Council, and other intelligence agencies are exactly that. Yes, it increased terror. In fact, it even created something which never existed — new training ground for terrorists, much more sophisticated than Afghanistan, where they were training professional terrorists to go out to their own countries.

So, yeah, that’s a way to deal with the War on Terror, namely, increase terror. And the obvious metric, the number of terrorist attacks, yeah, they’ve succeeded in increasing terror.
(Source: Alternet)

As always, Chomsky hits the nail on the head in a frighteningly robust manner.

This is the world we inhabit since Bin Laden, Bush and Blair started their campaigns of mass-murder. A lot has changed in the last five years. When I was last in London a week ago, I had a weird feeling. After a while, I recognised what it was: I felt like I was a kid again when the IRA were carrying out bombing campaigns all across England. I had the same unease. That’s a nostalgia I think I can do without. Spangles and Hector’s House, yeah, shattering sheet glass and nailbombs, no thanks.

It’s difficult for an average person like me to work out if my fear is at a justifiable level. The British public has been lied to so much by Blair and his government of toads that we have no true idea of how safe we are. Is there a terror alert because we’re genuinely at risk or is Blair pulling another publicity stunt / getting ready to bomb another Iraqi city flat? Who knows? Our safety has been sacrificed by Bush and Blair in their “War On Terror.” That’s the Great Lie that covers up Just Another War For Resources:

We are under a rigid doctrine in the West, a religious fanaticism, that says we must believe that the United States would have invaded Iraq even if its main product was lettuce and pickles, and the oil resources of the world were in Central Africa. Anyone who doesn’t believe that is condemned as a conspiracy theorist, a Marxist, a madman, or something.

Well, you know, if you have three gray cells functioning, you know that that’s perfect nonsense.

The U.S. invaded Iraq because it has enormous oil resources, mostly untapped, and it’s right in the heart of the world’s energy system. Which means that if the U.S. manages to control Iraq, it extends enormously its strategic power, what Zbigniew Brzezinski calls its critical leverage over Europe and Asia. Yeah, that’s a major reason for controlling the oil resources — it gives you strategic power. Even if you’re on renewable energy you want to do that. So that’s the reason for invading Iraq, the fundamental reason.
(Source: Alternet)

It’s 2006. Soon, it’ll be three years since the biggest mass-movement in British political history mobilised against Blair and his poodlery of Bush. Three years of enormous demonstrations, all of which were denounced by Blair at the time. He claimed there were WMDs, he hinted at secret evidence, he said we were 45 minutes from attack.

He lied and he continues to lie to this day. It was never about the safety of Britain, it was always about power. As all wars are.

Another New Year and Butcher Blair is still in No. 10.