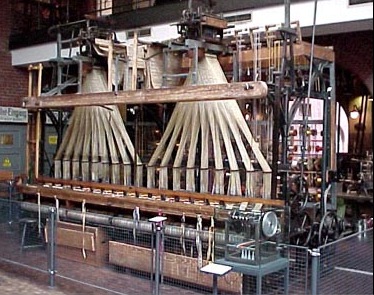 1801 saw the patenting of the device above, the Jacquard Loom. Yep, the shiny, bleeping piece of tech you’re reading this website on is a direct descendent of a loom. The Jacquard system was the first ever machine to use cards with holes punched into them:

Each hole in the card corresponds to a “Bolus” hook, which can either be up or down. The hook raises or lowers the harness which carries and guides the warp thread so that the weft will either lay above or below it. The sequence of raised and lowered threads is what creates the pattern. Each hook can be connected via the harness to a number of threads, allowing more than one repeat of a pattern. A loom with a 400 hook head might have 4 threads connected to each hook, giving you a fabric that is 1600 warp ends wide with four repeats of the weave going across.
(Source: Wikipedia)

And here’s some of the cards: 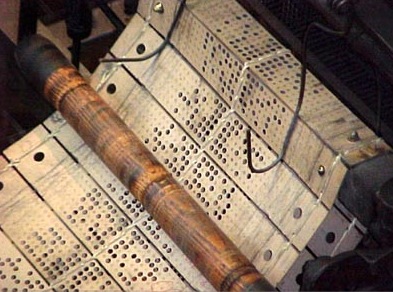 If you’re an old geezer like me, those cards will immediately look familiar. Even if you’re a young pup, maybe you’ve seen old sci-fi films where scientists pore over a computer the size of the house (with maybe 1 kilobyte of memory). There were no monitors back then, the input and output was on punched cards, or, if you were really fancy, punched tape.

Jacquard invented a way of digitising textile patterns. I wonder what he’d think if he could pop up now and see how we weave our entire world and relationships from a string of holes and no-holes.