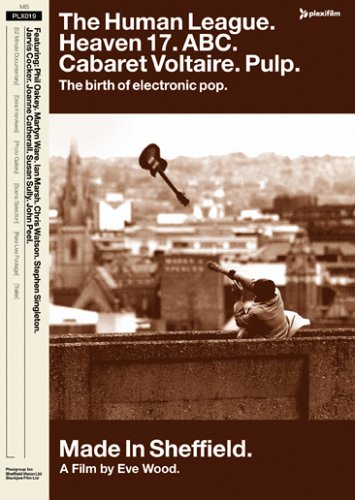 Above is one of my Christmas pressies: Made In Sheffield.

Of course, I’m going to love this DVD. It’s my generation, it’s the pop music that I loved as a teenager and that shaped the music I make myself. For a couple of years, music made on guitars seemed completely irrelevant and outdated. Everything exciting, everything innovative, everything that was young and now was electronic. For a few glorious months, we thought we’d killed rock music and all its moronic, leather-clad conformity.

We were wrong. But watching Made In Sheffield certainly gives you a taste of those times. The documentary interweaves interviews with gig footage, one minute we see Phil Oakey now, the next we’re seeing him back in 1980, looking like a Dr. Who villain and worrying people’s parents. Perfect.

Cabaret Voltaire, Vice Versa (who became ABC), The Human League, Heaven 17 – all the famous Steel City electropop pioneers are there, along with people less well known now like The Artery (Peel favourites), The Extras, Clock DVA, I’m So Hollow and Def Leppard.

This is the only 80s music documentary I’ve seen that doesn’t go for the simple, obvious line. There’s depth here and an accuracy that’s often lost in these days of Channel 4 ‘100 Greatest Beermats’ or whatever. In fact, it was just great to watch a long piece of music television without the usual D-grade celebs popping up, rehearsed unfunny anecdote at the ready.

The stories in Made In Sheffield are from the people who were actually there, playing in the bands, writing the fanzines, doing the sound or whatever else makes up a vibrant music scene. Jarvis and Saskia Cocker pop up and Jarvis gives his own view of the Sheffield scene at the time. It’d only take Pulp another 14 years before they became overnight successes.

Made In Sheffield is a joy, a treasure. It’s a meaty, detailed documentary in an age of fluffy, celeb-culture nonsense. It eschews the easy “HEY IT’S THE ’80s!” perspective that blunts so many other accounts of British electropop. It’s sober, funny, charming and often heartbreaking.

Then, when the actual film finishes, there’s the special features. Loads of DVD extras including interview footage not used in the film. There are so many great stories here about how bands got together and the trials they faced on their road to stardom / obscurity. It is, indeed, a shit business. Then, when you think you’re full, there’s gig footage from Vice Versa, The Artery and I’m So Hollow. So, you’ve bought a 52 minute documentary but you get 128 minutes to watch. Yum!

“Listen to the voice of Buddha…”