No Xmas logo by Gisela

Sony have deliberately infected millions of computers with spyware. The state of Texas is sueing them for this, in fact:

“Sony has engaged in a technological version of cloak and dagger deceit against consumers by hiding secret files on their computers,” said Attorney General Abbott. “Consumers who purchased a Sony CD thought they were buying music. Instead, they received spyware that can damage a computer, subject it to viruses and expose the consumer to possible identity crime…”
(Source: Boing Boing)

If a private individual, some happy young hacker, had done the same, they’d have been arrested and probably charged with being a terrorist or something.

But if a corporation infects millions of computers… well, that’s just peachy! Big business can do what the fuck it wants, invading our privacy and breaking our computers and cocksuckers like the RIAA just applaud their criminality.

This may seem like an empty boycott but I, for one, won’t be buying any Sony products or music until they fix what they’ve broken and apologise for their crimes. I’m actually in the market for a PC laptop to replace my Panasonic Toughbook and I was looking at one of the cheaper Vaio models. Not anymore!

So, if you’re about to buy any Sony CDs or other products this year as pressies, think carefully: the gift you give may actually be crammed with Sony malware. 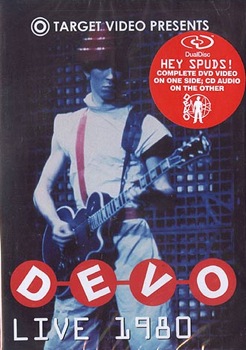 Devo first performed as the “Sextet Devo” at Kent State University in 1973. Co-founders Gerald Casale, Mark Mothersbaugh, and Bob Lewis were students at Kent State at the time the National Guard shot and killed students at a protest against the U.S. invasion of Cambodia–the ‘pivotal moment’ in their founding, according to Casale.

The original inspiration for the band’s name and underlying philosophy came from Oscar Kiss Maerth’s “The Beginning Was the End”, a pseudoscientific anthropological thesis which attributes the rise of man as an evolutionary accident caused by a species of sex-crazed, cannibalistic apes who developed tools to exploit each other sexually and feed on each others’ brains (See devolution). This metaphor is carried throughout Devo’s work as a commentary on modern society.
(Source: Wikipedia)

I’m a happy spudboy because I got the above this morning. No, not a Wikipedia quote, but a shiny, shiny DVD of Devo live in, er, 1980.

Devo set the tone for the DVD perfectly with their Star-Wars-style scrolling intro. They reminds us that in 1980 the lunatic known as Ronald Reagan was in the White House. Then they point out that the current occupant makes you miss Reagan.

Then we’re into the music and jumping and synth twiddling and it’s all amazing. Of course, the songs are fabulous, anyone with even a passing interest in pop music knows that Devo have written some of the greatest pop songs ever. Apart from the goliath that is ‘Whip It,’ which everyone and their Granny knows, we have ‘Uncontrollable Urge’ and ‘It’s Not Right’ and ‘Girl U Want’ and ‘Jocko Homo’ and ‘Be Stiff’ and ‘Blockhead’ and… well, a lot of classic pop songs. They mixed sex, politics, religion and seventy shades of random madness into their songs, effortlessly.

When I was a kid, Devo were about as uncool as you could get. Geek Rock hadn’t been invented yet by the major corporations to market their schmindie slops, so bands were meant to be “cool.” You know, wear leather jackets, take drugs, smoke on stage, official, regulation cool. Devo, dancing like mutants with plant pots on their heads, glasses and songs about pomes from Ancient Rome weren’t “cool.” Of course, young outsiders like me were drawn to them like fat moths to a searchlight.

If you’re weird, if you’re a geek, if you’re a freak, if you’re a mutant, you find yourself in Devo. No wonder Kurt Cobain was such a huge fan. This gig shows all the sides to Devo: yeah, they’re technically great musicians but that wasn’t enough for them. They try to connect with the audience in every way possible, they jump around like bastards, they put a huge amount of effort into their visuals and it all comes together into the world of Devo. How many bands have created their own world?

Do yourself a favour, buy a copy of the above DVD, make yourself comfy and experience one of the greatest bands ever. Who else could write a lyric like this:

They tell us that
We lost our tails
Evolving up
From little snails
I say it’s all
Just wind in sails
Are we not men?
We are DEVO!

Who would have thought that 25 years later, ‘Jocko Homo’ would still be essential topical listening?

The U.S. military command in Baghdad acknowledged for the first time yesterday that it has paid Iraqi newspapers to carry positive news about U.S. efforts in Iraq, but officials characterized the payments as part of a legitimate campaign to counter insurgents’ misinformation.

In a statement, the command said the program included efforts, “customary in Iraq,” to purchase advertising and place clearly labeled opinion pieces in Iraqi newspapers. But the statement suggested that the “information operations” program may have veered into a gray area where government contractors paid to have articles placed in Iraqi newspapers without explaining that the material came from the U.S. military and that Iraqi journalists were paid to write positive accounts.

The statement from Baghdad was the first official effort to explain the media initiative after three days of news reports describing efforts by the U.S. military to plant stories in Iraqi media under the guise of independent journalism.
(Source: Washington Post)

So, when the US military isn’t busy murdering foreign journalists, it’s subverting any base for a free press in Iraq. But this shouldn’t be surprising since bribery, mendacity and corruption are at the heart of the Republican party. They’re simply exporting those all-American principles to Iraq, making it into a wonderful democracy fit for US oil companies.

WMDs? Nope.
Chemical weapons? Nope, apart from the ones the US is using on civilians.
Peace? Well, George Bush said ‘Mission Accomplished’ on May 1st, 2003. If the current carnage in Iraq is his idea of job done, I’d hate to see his version of a war. And finally…
Democracy. Which doesn’t just mean holding elections, it means having a free and impartial media.

That’s nought out of four. Well done, Dubya! You sure are doing one helluva job there in Eyerak!