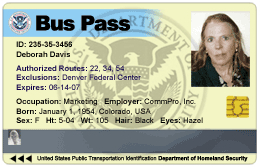 One morning in late September 2005, Deb was riding the public bus to work. She was minding her own business, reading a book and planning for work, when a security guard got on this public bus and demanded that every passenger show their ID. Deb, having done nothing wrong, declined. The guard called in federal cops, and she was arrested and charged with federal criminal misdemeanors after refusing to show ID on demand.
(Source: Boing Boing)

So, in the lad of the free, a citizen can’t even travel without being arrested for no reason at all. Brilliant!

If Blair and New Labour have their way, this will become the norm in Britain too. It’s not enough that we’re constantly watched by CCTV wherever we drive or walk, we’ll have to have our biometric ID cards on us too. If we don’t produce them, we’ll be hauled off by Blair’s stormtroopers.

Another good reason to say no to ID.