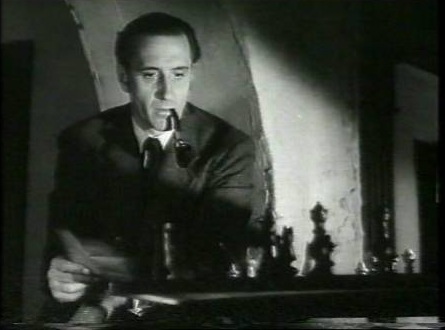 A man just fell into a room, clutching his neck. As he was helped to a chair, he said,

I love the fact that he’d been stabbed in the neck but was apologising for his rude, un-announced entrance. Now, that’s a true gentleman. He also had that lovely old posh English accent. It doesn’t exist now: contemporary posh Brits have an Americanised version. You can spot a toff because they say things like, “I’ll have a liddle drink…” The posh English pronounced “T” has disappeared.

So, in order for you to speak proper, like, here’s what you should say if you are attacked by a sharp miscreant:

“I’m terribly sorry, I appear to have been stebbed. I must apologise for the soiling of your furnishings. Please allow me to peh for the demeges.”

Note that the normal “a” vowel sound becomes an “e” in Old Posh. So, ‘stabbed’ becomes ‘stebbed.’ Also, ‘very’, which we normally say as ‘veree’ becomes ‘verreh.’ In the same manner, ‘pay’ becomes ‘peh.’ In New Posh, the transposition is less drastic and you must Americanise all ‘ts’ into ‘ds.’

“What beautiful hands you have!”

“What beautiful hens you hev!”

and, in New Posh:

“What beaudiful hends you have”

Apologisms to proper linguists for the above rambling. I is only ‘aving a bit of a larf, innit? 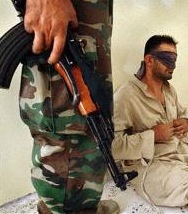 British-trained police operating in Basra have tortured at least two civilians to death with electric drills, The Independent on Sunday can reveal.

John Reid, the Secretary of State for Defence, admits that he knows of “alleged deaths in custody” and other “serious prisoner abuse” at al-Jamiyat police station, which was reopened by Britain after the war.

Militia-dominated police, who were recruited by Britain, are believed to have tortured at least two men to death in the station. Their bodies were later found with drill holes to their arms, legs and skulls.
(Source: Independent On Sunday)

Just in case anyone thinks I focus too much on American torture and human rights violations, here’s some sterling work courtesy of British-trained personnel.

After all, isn’t it a central tenet of our wonderful British way of life that innocents should be tortured to death with electric drills?

John Reid, New Labour’s Tebbit, certainly thinks so. In every interview I’ve seen, he remains proud of Britain’s illegal invasion of Iraq in search of phantom WMDs. He must be proud of the fantastic new democracy in Iraq and its marvellous security forces.

Isn’t it so much better to be drilled to death by thugs of a democratically elected government than by Saddam’s evil henchmen?

I’m sure as these Iraqis died in agony, they thanked Allah, Bush and Tony Blair for their liberation from oppression.

Hip hooray for Britain! Three cheers for our grand training and the heroic police of the new, democratic Iraq!

The disclosure drags Britain firmly into the growing scandal of officially condoned killings, torture and disappearances in Iraq. More than 170 starving and tortured prisoners were discovered last week in an Interior Ministry bunker in Baghdad.

In the US-controlled districts of Iraq, some senior military and intelligence officials have been accused of giving tacit approval to the extra-judicial actions of counter-insurgency forces.

Critics claim the situation echoes American collaboration with military regimes in Latin America and south-east Asia during the Cold War, particularly in Vietnam, where US-trained paramilitaries were used to kill opponents of the South Vietnamese government.
(Source: Independent On Sunday)

This weekend Amnesty International is holding a conference in London which brings together the biggest gathering of former “war on terror” detainees.

The first interview is with Moazzam Begg, one of nine British men who were held at Guantánamo Bay. He was seized in Islamabad in February 2002 by the CIA and initially held at Bagram airbase in Afghanistan for around a year. He was held in Guantánamo until January 2005, when he was released without charge. At Bagram he says he saw two people beaten to death by guards; one guard told him how it was necessary for them to “dehumanise” detainees to cope with working there.
(Source: The Guardian)

Here is the truth behind America’s War On Terror. It’s a story of grand lies and evil, of non-existent WMDs, of murder and torture, all being spun by Bush, Blair and their media lapdogs as some kind of crusade for freedom. Can there be anything more stomach-churning than torturers claiming they’re fighting for human freedom?

America stole three years of Moazzam Begg’s life. They falsely imprisoned him. That’s kidnapping. Then, after three years, they released him without any charges whatsoever.

That could happen to you. You could be totally innocent and still be spirited away by our police or, even worse, the American military.

You have no rights. The War On Terror has removed all your rights. You are now a subject of President Bush and his poodle Blair.

Here’s what Begg says about his imprisonment:

[At Bagram airbase in Afghanistan] The guards had put barbed wire at the back of the cages or the cells where we’d use that area as the latrine. This detainee had apparently been able to push the barbed wire through and crawl out and run out – completely confused as to whether he’s going left or right or where he was going to go in his orange suit. So the guards caught him and they beat him literally to death. After which they dragged him in front of all the cells which were there and that’s when I saw his body. They took him to the medical room which was also opposite the cell where I was and they closed the doors. After that there was a whole series of doctors and medics and officers running in and rushing about. And eventually they carried his body out on a stretcher with the blanket covering his face and all we could see were the beaten soles of his feet that were visible.
(Source: The Guardian)

Can you imagine witnessing that? Can you imagine being kidnapped by the US military and knowing that another detainee has been beaten to death. This man was completely innocent, no charges were filed, there was no trial by a jury of his peers.

He was murdered by US soldiers.

All in George W. Bush’s fight for freedom, for liberty, for justice.

Imagine being Moazzam Begg, knowing that your life is worth nothing to your American captors. Knowing that you could be beaten to death next and it would be reported as an “insurgent casualty.” No-one would even raise an eyebrow.

We were put into an American detention centre at Kandahar air base. Every one of us suffered from torture and humiliation. The beatings became a routine. Isolation wards, unsanitary conditions and we were sleeping on the sand in the winter. This humiliation was bringing us to our knees.

The torture we were subjected to include beatings and systematic provocations to try and make the detainee break some instructions. And when that happens a special team is called – they would run into the cell, beat and chain him up.

During the interrogations they left you in a cold room for a few weeks. Isolation wards are a good example. We weren’t given anything to lie on – no carpet. All of us have problems with our kidneys because we slept on the iron with air conditioning on. It was freezing cold. The ceilings began to be covered with condensation from the cold. We were held like that for months. I was in the isolation ward for five months. I consider the biggest humiliation I have suffered is the stigma that the Americans gave to me. The life-long brand of terrorist, extremist, which I received in Guantánamo has stayed with me since being extradited to Russia.
(Source: The Guardian)

I haven’t seen the Amnesty conference on any TV news. Maybe it was hidden away somewhere but it certainly wasn’t a top headline. Perhaps it isn’t newsworthy that our major ally in the illegal occupation of Iraq is engaged in systematic murder and torture.

Remember, what happened to the people above could easily happen to you. As the law stands now, you can be held for 28 days with no charge, just because the police feel like it. Or, even if you’re a British citizen, the US could kidnap you and hold you, like they’re still doing to ten British citizens and the UK government won’t even dare to complain. No charges, no trial, just torture.

Maybe you won’t ever come back.