I’m just watching a BBC 2 documentary about Coca Cola and its current downturn. Nutritionists, lefties, anti-globalists, even Arnie is anti-coke. Yep, The Terminator is anti-Coca Cola!

All of which makes me wonder about Jack White’s decision to do an advert song for Coca Cola.

1. So fucking stupid he doesn’t realise the company he’ll be promoting is linked with torture and murder?
2. So arrogant/apolitical that he just doesn’t care?

White’s enthusiasm for the soft drink is the real thing. An unabashed Coke head, White once told ContactMusic.com that he used to down “six [Cokes] a day” and that “it’s the greatest drink ever made by man.”
(Source: E Online) 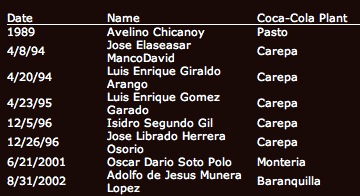 Which is it, Jack? Stupid or evil?

Frankly, I’ve always thought The White Stripes were a bag of whank on a stick musically. Now they’ve found their ideal corporate partner! And they won’t even have to change the colour of their stage-clothes.

Please click here to find out more about the Killer Coke campaign. 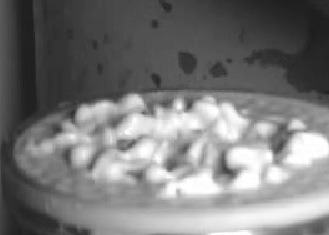 Via BoingBoing, have a look at a video of cornstarch behaving extremely strangely. The above grab is from the end of the video, where it became an unholy monster. I’m hoping it’s a CGI-fake but I suspect the truth is that cornstarch actually is an evil demon, merely waiting for a bit of water and a tap to EAT US ALIVE! Save us, oh Great Pumpkin!