Very quiet night tonight, I think the pre-Crimbo lull has kicked in. Either that or everyone’s got avian flu. Despite that, I still got some requests! One for Arcade Fire and one for The Lucksmiths. 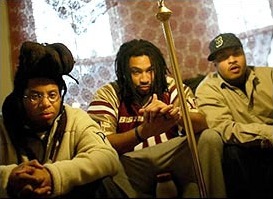 The Perceptionists. Definitely not keen on Dubya.

The best new track tonight was actually released in March, during my DJing hiatus. It’s The Perceptionists’ ‘Memorial Day.’ In this one track, you’ve got the essence of why hip hop is the most political protest music alive. And why rock, in all its apolitical, irrelevant excess, is dead and should be buried, along with its leather jacket and shades. Here’s an excerpt from the lyrics to ‘Memorial Day’:

Where are the weapons of mass destruction?
We been lookin’ for months and we ain’t found nothin’
Please Mr. President, tell us something
We knew from the beginning that your ass was bluffing!

[Akrobatik] I never thought of this the day that I enlisted
That I’d be dodging bullets, seekin weapons that never even existed
For someone else’s personal beef, I risk myself
While the Commander-in-Chief, would never come to fight himself
I feel I’m bein’ tricked even worse that the civilians
Nobody ever told me that we would be killin’ children!!
Feelin like the ones that sent me here are the psychotics
but if I say that out loud — I’m “unpatriotic”
but would Donald Rumsfeld back me up with the chrome?
Would Tom Ridge fight or would he stay secure back home?
and would Condoleeza Rice cover grenades in a fox hole?
I’m startin to believe what I was told is not so
What’s the reason for the war?
I’m shootin at these people that I got not animosity for
I wonder if I’m just a pawn in someone else’s struggle
or a here even though I’m just a small piece of the puzzle
I know that when I finally return where I reside
I’ll make up for the months my wife and moms cried
and carry on for all my fallen brothers that died
but you can’t take my pride — cuz I’m a fuckin’ SOLDIER 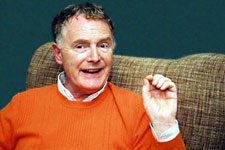 The best old song was by prize loon and inventor of everything, Malcolm McLaren. It was the sublime ‘Double Dutch.’ As soon as I hear the sound of the skipping ropes at the start, I’m transported back to when I first heard this lovely pop record. Mmmm…