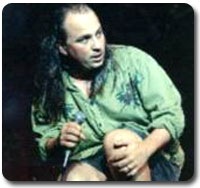 Bobcat Goldthwaite. Should be sueing as many bands as Gang Of Four.

Maybe it’s post-Sweden malaise but I’m finding fuck-all new non-Swedish indie that’s worth much. Everything has got that kitchen-sink production, layers of crap over everything. And over the churning, over-instrumented morass, the yelpy lead vocal.

Look, I like The Arcade Fire. I don’t mind Modest Mouse. I even like a couple of Bright Eyes songs. But does everyone now have to sing in that same, yelpy indie voice? You know the voice I mean, exactly like Bobcat Goldthwaite in Scrooged.

I am so fucking bored of this strangled, quavery, wavery vocal style. Fair enough if it’s just how you sing but it’s so obviously put on by every American-sounding indie band now. It’s as overdone as the doomy Ian Curtis style.

Fuck. Don’t people have their own voices any more? Is everything just a set of artfully glued-up templates?

Stop it now, you boring bastards.