Pop composer Burt Bacharach has written his first lyrics in a career spanning nearly 50 years, expressing his disillusionment over the war in Iraq.

The 77-year-old, who wrote songs such as Walk On By with lyricist Hal David, has written a number of political songs on his latest album At This Time.

Bacharach previously left David and his ex-wife Carole Bayer Sager to write the lyrics to his songs.

“I thought that was very important because I couldn’t have somebody else write these lyrics.”

He added: “I never was a political person in my life. I wrote songs during Vietnam, not about Vietnam. I was just writing love songs. Leading my own life in my own insulated world.”
(Source: BBC News)

So Burt Bacharach, a 77-year-old geezer, never known as a radical, is questioning the US invasion and occupation of Iraq?

This really shows the bankruptcy of modern rock and indie culture. What used to be the music of rebellion, of revolution, of non-conformists, punks, queers, troublemakers and people your Mum generally didn’t want you to know has become the music of saying nothing.

BUT SAYING NOTHING REALLY LOUDLY, WITH A SNARL, AS IF YOU ARE SAYING SOMETHING!

All the contemporary rock bands who are busy fucking the corpses of the ’80s, ’70s, ’60s or whenever are missing the point. If you rip-off, say, Gang Of Four or McCarthy or MC5 or Neil Young, it’s not enough to just wear similar clothes, take similar drugs and play similar chords. You’ve left out the most important thing about those artists: their politics. The result is karaoke rebellion, about as dangerous as a Tory MP singing along to James cocking Blunt, a complete fucking sham.

If you’re a musician reading this, you have a choice. With fame comes power. If you’re a famous rock/indie band, you could use that power to highlight the great evil being done in Iraq, you could make your legions of fans think about who they vote for, you could raise issues the mass-media want to avoid. I’m not saying you have to preach, but you could at the very least question and explore. Like Bacharach.

Or you can say nothing. Like the people who kept quiet when Hitler came to power in Germany, you can turn a blind eye to the evil being done. You can ignore the 100,000 Iraqi dead, slaughtered by us, much as some Germans chose to ignore their missing Jewish neighbours. Why rock the boat, eh?

You just keep your mouth shut, keep working on that fashionable drug habit and looking pretty for the cameras. 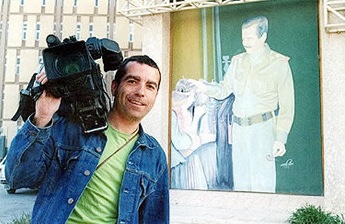