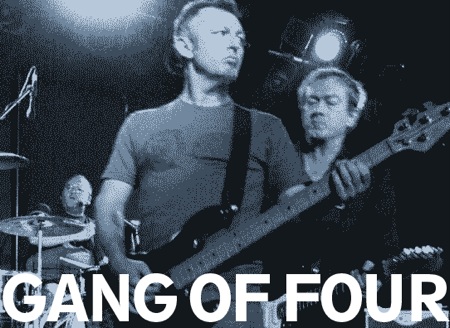 Junkmedia come up trumps again with a great interview with Dave Allen from Gang Of Four:

I’m talking about the new bands. I mean, what on earth are Bloc Party up to? Franz Ferdinand? All of these bands. They’ve borrowed our sound but they have not gone anywhere near our sociological lyrics. It’s hard to describe what we do. I’m trying to avoid the word “political” because we’re just not. We’ve been painted as a political band, we’ve been painted as a Marxist band. We’re usually asked those questions by people who don’t understand Marx whatsoever. We’ve taken to throwing that back in their faces a bit, “Well, what does Marx mean to you?” and they stare at you. (laughs)
(Source: Junkmedia)

As an angry old man myself, I agree with a lot of what Dave says. But I can’t help but feel he’s judging indie-rock now by the most conformist, most easy-listening layer. If you read this rant by another Dave, you’ll see there are still indie-rockers under 30 who have some fire in their bellies. It doesn’t all have to be mewling post-Coldplay mawkishness or empty metal histrionics.

Bloc Party and Franz don’t even claim to be revolutionaries. They’re just the noughties equivalent of The Merton Parkas or The Monks. Every generation has artists that connect with the political world and those who don’t / won’t / can’t. That being said, I’m not slagging them off, I think they occasionally make catchy pop singles. But they’re hardly Narodniks, are they?

Pop over and have a read of the interview, linked above. They’re posting part two up tomorrow.

Just noticed Gaz has posted this up too, using exactly the same quote! I guess old men think alike…