Baroness Thatcher has criticised Tony Blair for taking Britain to war in Iraq on the basis of flawed evidence about Saddam Hussein’s weapons. The former prime minister’s embarrassing criticism emerged as Mr Blair was among the 670 guests who attended a party to mark her 80th birthday.
(Source: The Independent)

Now Thatcher, the woman who singlehandedly devastated Britain in the 1980s, has condemned Tony Blair’s warmongering.

Answer me this – in what way is Tony Blair a socialist? Why is he leader of the biggest socialist party in Britain, the only party with direct mass-union funding? He doesn’t believe in nationalisation, he wants to dismantle the NHS and he thinks it’s just peachy to hold innocent people with no trial or charges for months. Socialist?

She added: “The fact was that there were no facts, there was no evidence, and there was no proof. As a politician the most serious decision you can take is to commit your armed services to war from which they may not return.”
(Source: The Independent)

Have I unwittingly passed into some mirror universe? Where Tories are the cautious, law-abiding politicians and Labour politicos are blood-hungry hawks?

I find it incredibly strange that the woman who launched us into the Falklands War has damned Butcher Blair’s warmongering so thoroughly.

What the bloody hell is going on?

[Groucho] I don’t know what they have to say,
It makes no difference anyway,
Whatever it is, I’m against it.

No matter what it is or who commenced it,
I’m against it.

Your proposition may be good,
But let’s have one thing understood,
Whatever it is, I’m against it.
And even when you’ve changed it or condensed it,
I’m against it.

Pretty much how I feel today. Thank fuck for Groucho Marx and his siblings… 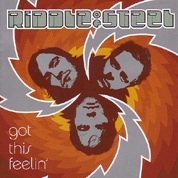 What’s an alloy of carbon and iron?

A couple of days ago, I got this email:

Assuming I do have the right man, and you are the dj who’s been jamming our stuff, I’d like to say how absolutely grateful we are for your attention, and to be sandwiched in among some of our heroes is flattery on a scale that we are hardly used to.
Anyway, I can’t thank you enough.

It’s from Andrew from Riddle Of Steel. They’ve made one of my favourite rock albums of 2005, ‘Got This Feelin.‘ The track I’ve been playing at the Bless, ‘Baby Bird,’ is a bassy, tom-heavy rifferama. It’s amazingly catchy and everytime I’ve played it, I’ve had people ask me who it is.

So when I got the email from the band, I was chuffed. Until I got to this bit:

Hit me back if you get a moment so I can regale you with more questions, starting with: how did you hear about us??

This is where a budding friendship often goes awry. For you, faithful reader, already know how I get to hear new music. 90% of the new bands I play when DJing I first hear via downloading. Whether that’s

I only heard about them because I dug them up on the indienet. Sure, now they may be in the NME and other cutting-edge (HAH!) publications. But what use is that to me, as someone who’s always searching for new music? I don’t want to wait around for a whole year after a band’s album comes out to hear about them just because the NME are too busy hyping Hard Fi or other major-label dross.

That’s the truth of the music world at the moment: the best place to find wonderful new music is the internet. Radio, TV and the music press have got their heads so far up their arses that their ringpieces are distant memories. It’s not Radio Ga Ga for me, it’s Radio MURDER DEATH KILL. If I have to hear Katie Melua simpering winsomely one more time about bleeding bicycles, that’s what’s going to fucking happen.

And all the endless so-called ‘alternative’ shows are filled with the same Indie Clagg. I won’t name bands here, you know who they are. You know you’ll see their videos / hear their song every time you switch on, over and over again until you want to garotte the entire London media establishment. One would think there were only ten bands in the world, the high rotation these schmindie chimps get.

Here’s a question for the London music media, excuse me while I shout:

DOES NO-ONE CARE ABOUT NEW NON-MAJOR-LABEL MUSIC? IS IT ALL ABOUT FAT ADVERTS FROM THE MAJORS? WHY ARE YOU SO FUCKING LATE ON EVERY FUCKING BAND EVER? ISN’T IT MEANT TO BE YOUR BLOODY JOB, YOU USELESS COKEHEAD CUNTS? HAVE YOU NOT HEARD OF THE INTERNET?

Back to Riddle Of Steel…

This morning I had two options when replying to Andrew’s email:

1. Lie. Say I’d seen a review somewhere / heard it on the radio and then rushed out to buy the CD
2. Be honest. Say I’d downloaded their album, loved it and then bought it.

If I go with option 1, there’s a high likelihood that the band will be happy, want to be my friend, give me back-rubs and take me for picnics in sun-dappled glades. Happy otter!

If I go with option 2, as I always do, there’s a high likelihood that the band will be very unhappy, call me a thief, cry and slam the door before phoning their Mum in tears and telling her she was right all along, I am a beast. This, despite the fact that I’ve actually bought their CD(s). Sad otter!

This morning, I was tempted, just briefly, to lie. It’s so much easier. And bands are so much happier if you say you heard their music on the radio rather than on the net, even though you’ve not bought their record either way. And I’ve had some very bad responses from bands because I’ve DJed their music and got people to buy their CDs. And. And…

All I can say is that a lot of music that would never have been heard even five years ago is now getting heard.

If the media establishment and major labels had their way, the indienet’s P2P and torrent sites would be shut down, your every online move would be tracked and approved by government watchdogs.

To find new music you’d have to turn to… the media establishment and major labels. Funny that, eh?

This news just in:

From: Paul ‘Three Guns’ Sellars
Given the subject matter of your recent rant, I was wondering if you’d considered releasing your new LP under a Creative Commons license…?

As I understand it, you wouldn’t be under any obligation to post any tracks for download – but it would mean that people who bought the CD would be free to rip and P2P it with a clear conscience.

Have a read of the license. Surely all music should be released under these terms? Anyone who’s got any of my 7″s, flexis, cassettes or CD albums, feel free to upload them. I don’t give a crap!