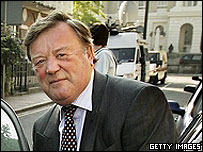 Conservative leadership contender Ken Clarke has said Tony Blair made a “catastrophic error” in involving the UK in the war with Iraq.

The ex-chancellor, who opposed the war, said the reasons given for the UK supporting the war were “bogus”.

The war had increased the threat to the UK from Islamic extremists, he said.
(Source: BBC News

Yet another Tory comes out and says what the feeble Blairites of New Labour are afraid to admit.

Support for Bush and his crazy crusade is at an all-time low in the US:

WASHINGTON (Reuters) – President George W. Bush’s approval rating slipped to a career low of 45 percent on concerns over the Iraq war and spiraling U.S. fuel prices, according to an ABC News/Washington Post poll published on Tuesday.

The poll of more than 1,000 people found that 57 percent disapprove of Bush’s handling of the war and 68 percent regard the level of American casualties as unacceptable.
(Source: Washington Post)

But in Britain, Blair’s getting an easy ride from our toothless media. It seems we should all just forget about Iraq like Tony wants.

Even though Clarke is officially an evil overlord, his highlighting of Blair’s mendacity is to be commended.

If only Labour politicians would recant and admit that this country was railroaded into an illegal invasion by a power-mad PM.