A lot has changed in ten years.

Back then, my first point of contact with the net was Compuserve and their user groups. I quickly moved on from there to the wild, open spaces of Usenet. Ahh, golden days! Hanging out on alt.geek, uk.music.alternative, rec.arts.sf. Yeah, there were crossposters and flaming, spammers and nutters but Usenet in the ’90s was a million miles from the world of easy-access web forums we live in now, where anyone with half a brain can click and post streams of shite. If that sounds elitist, it is: I’m prejudiced against dickheads.

I did an essay for Uni in ’96 and here’s a screengrab of Usenet at its finest:

A lot of posts about Kevin Mitnick, as you’d expect. Back then, the net as a whole was a lot geekier. It wasn’t the massive, rolling juggernaut it is now, bulldozering into almost every aspect of modern life. Ten years ago, if someone told you they were on the net, you could pretty much be certain they were a fellow geek. Nowadays, it’s about as unusual as having a mobile phone. Maybe in ten years time, people who aren’t online will be regarded as freaks in the same way as people who don’t have televisions now are.

Here’s how the number of people online has grown in the last ten years: 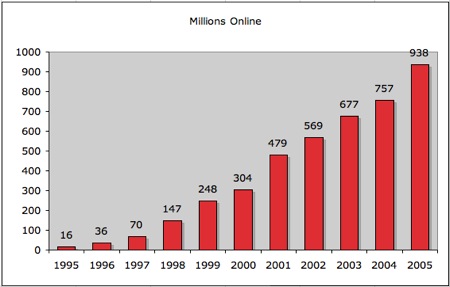 What an incredible increase, from 16 million to nearly one thousand million, from 0.4% to 14.6% of the world on online.

Of course, net uptake is still hugely skewed towards the rich countries. But what will happen in the future? I think it’s pretty obvious that internet access in the future will be through wi-fi WANs. We’ll regard our old access via home cable TAs and ADSL boxes as nostalgically as I do my v.34 modem.

The cost of providing this infrastructure will be enormous but I think it’ll be absorbed by government. We would worry about which ISP we’re with / how we connect to the net as much as we now worry about streetlighting. The net will be ubiquitous and free at point of purchase (which is definitely not the same as free). Whether the funding comes via taxation (as for streetlights) or private enterprise (as in non-BBC radio and TV), I don’t know. Personally, I think access to the net will become such an everyday part of future life that only a government determined to hobble its populace would leave internet access to the anarchy of the market. As the price of tech comes down, the poor countries will finally come online and the net will lose the English/American parochialism it now has.

Just yesterday, I found this excellent new tech demo via Digg. Go and have a look.

It’s 2015. You’re walking round Derby, up Sadlergate towards the Guildhall. You’ve got your net shades on or perhaps you’re vain and wear contacts. As you look around, you interface wirelessly with the net via your watch/music player/GPS. You don’t need anything as bulky or old tech as an iPod. You listen to your own music collection legally via a future version of Last.fm – it’s streamed from their servers, why would you want to carry the data around with you?

As you see people approaching, some of them allow you to see their public glyphs. Imagine something like a MySpace or Friendster profile that pops up when you glance their way, hovering a foot above them or next to them if there’s room. Of course, there’s nothing there in the physical world: it’s data abstracted from the net and then mapped onto your shades/contacts via a future version of that software dugg above. Can you imagine how this would enhance flirting? If you’re a pretty boy/girl/neuter, you’d probably get bored with the amount of saucy IMs beamed at you as you stroll round town. Remember, any advance in tech is first used for sex, it’s our favourite activity.

As you get to in front of where the Assembly Rooms used to be before it was burnt down by a clutch of escaped gentech dragons in 2010, you see a commotion ahead. An enormous Pac Man the size of a bus appears to be racing across the square. Some bloody kids have have hacked the council’s 3D image servers and pasted some retro imagery into the public access viewspace.

Note: the real world, unassisted by the net, looks the same. In fact, it’s duller than before. Why should shops and banks spend money on flashy plastic signs when they can stick an electronic facade up on the net? It’s easily updated, never wears out and can’t get encrusted with pigeon shit.

If the above sounds like sci-fi lunacy, bear in mind how much the net has changed our lives in the last decade. How many kids running round now wouldn’t have existed without net romances? How much shopping have you done on the net? Ebay and Amazon are ordinary words now in our everyday conversations.

On a global level, how much is the huge antiwar movement that’s mobilised against Bush a product of the net? I know that in Gulf War I, information was much harder to access than now when it’s one click away.

The downside will be our loss of anonymity. Total strangers will be able to do the future equivalent of Googling us anywhere at any time. Do you really want people you don’t even know sniffing at your naff musical taste as they pass you in the street? What about the access to your data the police and government will have? It’ll make the current furore over ID cards seem quaint.

I have no idea whether any of my predictions will come true.

But I know the next ten years are going to be very interesting.