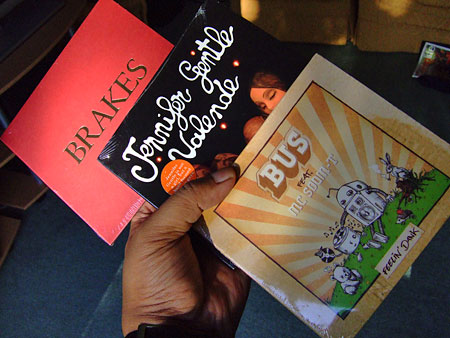 Brakes album ‘Give Blood‘ is a rocky guitarry indie gem. If you love sarky, mardy, sneery, punky songs that have a pop at anything within spitting distance, you’ll love this. Apparently, it was all recorded live, the talented bastards!

Here’s what their label says about them:

The debut album from brakes who consist of tom and alex white from electric soft parade, eamon from british sea power and marc from the tenderfoot. they might make music for fun / friendship but they have without doubt recorded one of the albums of the year. the entire album is over in 28 minutes with the shortest track just 10 seconds long.
(Source: Rough Trade)

The best thing about this record is the singer’s gorgeous accent. As Eamon yelps magnificently through the frankly brilliant lyrics to ‘Heard About Your Band’ I couldn’t help but smile in recognition and solidarity. How many of us haven’t been accosted by shite-spewing cokeheads while trying to watch a band we love?

Ummm… I suppose I should give you some sonic references. Well, it’s indie guitar rock (as you may have guessed). There are shadows of the sadly-defunct Mclusky, nuggets of the bile of The Circle Jerks and the withering scene-eye of prime Pooh Sticks. Oh yeah, and the verse from ‘Ring A Ding Ding’ is a great steal of ‘Virginia Plain.’ Niiiice!

Really, how can I dislike a band with a ten-second song called ‘Cheney’ which basically demands he stop being a dick? Who said all political songs had to be long and meandering? I do reckon these lads could do a great cover of ‘Deny Everything.’ That being said, I much prefer Brakes’ original songs to the two covers on here. They’re not bad, just… well, un-necessary.

I notice the fashionable indie sites are already queuing up to slag this album. Fuck ’em if a record of great pop tunes can’t melt their cold hipster hearts.

Here’s some guff about Bus:

Bus approach at a leisurely speed. Since their inception in 2001 Daniel Meteo and Tom Thiel have zigzagged their dub double-decker between a handful of stops to release their music into this world. Besides a chronic lack of time this is less of a concept, but rather a freedom they claim to tackle ideas spontaneously and with the right impulse. When it comes down to it, their common love of reggae can always be relied on as an ignition and directional musical compass. It comes as no surprise that Daniel Meteo and Tom Thiel would meet one day, as both are heavily involved in Berlin’s musical menagerie.
(Source: Bus Stop)

contrary to her youthful good looks, mc soom t is an experienced and well travelled mc on the glasgow underground scene. having rapped since ’98 with many hip hop, techno and electro sound systems, she has recently proved her versatility again by getting thru to the final of the 8 mile mc championships 2003 (click here for review). although she did not win the final, she fully represented for not only the females (only female finalist), but for the scots as well (only scottish finalist!) thus we crown mc soom t scotland’s best mc and the uk’s best female mc!
(Source: Monkeytribe)

So, yeah, the CD is bassy, natch. It’s also subversively catchy. When I first heard it, I just left it on as background, quite low. But then I found myself stopping to listen to certain tracks more closely, turning them up and exploring. Some of it sounds vaguely like Funkstorung’s remix work but less frantic. There is the same sense of twitching, stridulating electronics though, in total contrast to the distorted confinement of Brakes.

There’s a lot of space to explore here. Bus clatter and clug along, always sparse but never lazily so. The drums on tracks like ‘Diamond In The Rough’ sound like pan lids but they’re meshed into smooth sub and squelchy countersynths.

You can hear the post-processing of MC Rhino on ‘Psychotic Episode’ (maybe Melodyned?) and the effect is perfect both rhythmically and thematically.

This CD isn’t as obviously poppy as a lot of the stuff I rave about. In that, and only that, it’s like Durutti Column. It requires your time and attention. Or should I say inattention? I think if I’d sat down and “listened” hard to it, I might not have liked it as much as being ambushed.

So there you go: two albums, totally different. One baked from electronics, one not even had a sniff of a computer. One cowpunk gobshiteing, one Scots-Berlin para-grime.