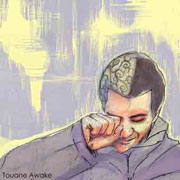 Seems to be my night for Italian music. I’m now listening to the new album by Touane. It’s called ‘Awake’ and came out on Persona Records this May.

It’s damn near perfect for this time of night. It’s not as glitchy as, say Nautilis or OOO but it’s still got a hefty rhythmic base. It’s also more upbeat than Seven Ark’s last album, as lovely as that was.

‘Sleep Tight You’re A Star’ is my fave so far, with its lazy jazziness accompanied by the obligatory IDM insect rhythm section. I’m a sucker for vibes playing major 7ths, man.

But all the tracks have their own little twists and turns. ‘To Dream About Them People’ is almost (but not quite) disco whereas the opener ‘Pendulum (Let Your Nerves Speak)’ starts off all thin and clicky but then wheels in a bassline pinched from a ‘Speak And Spell’ offcut. Well squidgy, in a random arpeggiator way.

I think it’s the rhythm of the album that’s hooked me. In places, it veers into minimalism, ambient even. But you’re never too far away from a head-nodding beat or another lovely obese bassline. ‘Backward is Forward’ comes in all Neu! but then goes a bit George Benson before adding a Devo bass.

God, I’m making this record sound completely derivative! It isn’t, it’s just I’m not as good a writer as Touane is a musician. He’s managed to incorporate so many diverse melodic, structural and timbral influences that this record is a little treasure chest for anyone who loves electronic music, as I do. (I say electronic but there are plenty of guitars on here. Electronic guitars, mind.)

Although it sounds bugger-all like it, trying to review this CD reminds me of this breathless Usenet review I did back in 1998. I loved that CD as much as I love Touane’s. I’m not mentioning the band by name here because they’ve since become the one electronic band every indie kid has in their collection (after Aphex Twin) and I’d hate for this album to suffer the same pigeonholing.

This is great music. Music everyone should own. If you make space and time for it, it’ll nuzzle up to you and purr.

I’m just listening to ‘A Little Mercy’ by The Durutti Column which is, apparently, twenty years old…

Fuck me, time flies, doesn’t it? I remember buying this 12″ (‘Say What You Mean, Mean What You Say’) and listening to it time after time, entranced by the otherworldliness of it all. In 1985, this record stuck out like a sore thumb. It still does now.

Twenty years later and I’m posting about it on a worldwide TCP/IP network. 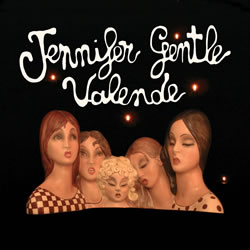 Just half an hour or so ago, I was listening to the Jennifer Gentle album. I guess it’s my night for floaty guitarness… Coincidentally, Jennifer Gentle are Italians, whereas Vini Reilly is from Manchester but named his band after an Italian anarchist.

Jennifer Gentle could be Vini’s kids. Their album has the same warmth and delicate melody as his music and isn’t afraid to wander away from pop’s more rigid forms. The first three songs, all unstable, catchy psychpop, set the stage for the middle triptych of floaty-dissonant-floaty.

‘The Garden (Part One)’ is particularly sunny and reminds me of trying to dig to China on Hemsby beach when I was seven. True, Jennifer Gentle do spin off into more dissonant and Barrattesque psych territory but there’s still the same pastoral idyll going on underneath the majority of this album, like a duck’s little flippers.

If you buy either The Durutti Column or Jennifer Gentle you’ll have to listen a bit longer than normal for pop. But you’ll be rewarded with music of rare grace and heart.

My god… ‘Silence’ has just come on. It’s beautiful.