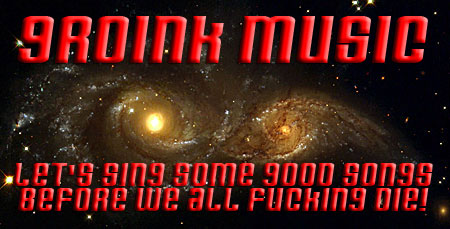 (Tonight, I got bored, restless and annoyed waiting for 230gigs of data to copy onto a backup drive. So I wrote the below manifesto for your education, elucidation, entertainment and perhaps as the first shot in the worldwide armed struggle against Pretendy Music. Pretendy Music is the opposite of Groink Music: Pretendy artists don’t use their own voices, don’t sing about their own lives and only do things if they are fashionable and bankable. Groink Musicians sing how they speak, live what they sing about and always wear comfortable shoes.)

Too much MTV will kill you.

Or at least send you deaf.

Yep, I’ve been watching too many “cutting-edge” rock/emo/indie bands again.

OBSERVATION: There are at least 2.36 million ways to play guitar. You can play it very badly like I do (if you un-practice diligently for seventeen years). Or you can play it in a virtuoso, John McLaughlin manner.

QUESTION: Why, then, choose to play it in the workmanlike, merely mediocre fashion that schmindie bands on MTV do?

Give me hot or cold. Lukewarm doesn’t fire my synapses.

Put some real effort into it, cut your fingers to shreds with your practicing or be proud to play with simplicity and candour. Every weekend, every guitar shop in the world is packed with adequate guitarists talking bollocks about string gauges and fretboards while the staff fake smiles and feign interest. The talkers are mediocre musicians, mediocre artists. They haven’t the talent for brilliance and they haven’t the wit to be bad.

OBSERVATION: There are at least 6,800 human languages.

QUESTION: Why, then, sing in English if it isn’t your native language?

(English is actually my second language, my first being Oriya. But my parents were told not to speak it to me when we moved here as it would damage my progress in English. Rubbish, of course, but the damage is done and now I only have scraps of household Oriya.)

Moreover, if you are an English speaker who’s not American…

SUB-QUESTION: …why sing in a terrible, fake American accent?

I have nothing against real American accents, they’re gorgeous and hypersexy. But the bland, nasal whine adopted by Brits singing in fake American is painful and un-necessary.

(One of the reasons I love this band is that I can tell where the singer is from. I can even tell which bit of the city he’s from.)

Of course, it’s always argued that it’s artistic licence and somehow the fake accent represents some inner truth. This is hopeless bullshit. Imagine meeting someone from, say, Hellesdon, who talked as if they were from Alabama. You’d think they were mental. Why does that change if they sing like that?

If music is anything to do with truth, we must first start with being ourselves and only then can we maybe start pretending to be Americans or channelling the spirit of dead Sioux warriors or whatever. And while I’m here, can all you necrophiliac bastards stop singing like Ian Curtis, pleeease?

OBSERVATION: There are many wild, interesting events that happen in the average person’s life. Sex, drugs, violence, arguments, crimes. Moments of tiny drama which may not be world-shaking but which are life-changing.

QUESTION: Why, then, sing about fuck-all?

Bands on MTV, why do you codify and obfuscate, why do I need to be a Bletchley-level cryptographer just to try and work out what the fuck you’re on about? It’s not big and clever and it’s certainly not real poetry, no matter how anguished your delivery and expensive your video. Could you not just tell me, in plain, simple language, about the first girl you fingered or the first boy you sucked-off?

But maybe you fancy yourself as the John Irving of rock lyrics, weaving fanciful fictions that enthrall your rapt audience? This is highly unlikely: more likely you’re doing a rubbish version of Bowie’s cut-n-paste and have ended up singing about meerkats and John Menzies. Try writing songs about real things first, eh? Maybe then you can graduate to multilayered mysteries of metaphor and magick.

SUB-QUESTION: But what if my life isn’t interesting enough to sing about?

Then, mate, you’ve got two options:

1. Stop being a songwriter, you dull fucking bastard.
2. Lead a more interesting life.

Say you’re a straight, white, middle-class English bloke who doesn’t feel very strongly about anything, even sex. Perhaps you could try getting arrested for something blasphemous in a strict Islamic country? Or maybe try going to a BNP meeting and saying you really fancy black girls? You’ve got an album just there! See? It’s easy!

And by the way, being more interesting doesn’t mean drinking or drugging more – those activities make for dead-eyed, twitchy songwriters who disappear up their own arses. Face it: every bastard drinks, gets stoned and bores their mates with pill stories. Wouldn’t you like to stand out from that sedated herd of anxious pinheads?

Summation and Call To Arms
Comrades, siblings, fellow travellers and the two people in US Military Intelligence who pop up on my server stats, lend me your ears!

In saying all the above, I’m not claiming that the music I make is wonderful. All I can say is that it’s real: I sing how I speak, I write about what happens to me and, most crucially, I wear very comfortable shoes.

This galaxy is shortly going to collide with Andromeda. In a few years*, our Sun will expand into a red giant and since we will never have stopped killing each other long enough to get off this planet, all human culture will be lost. All our art, writing, music. All gone. Even those tortured LiveJournal entries…yes, you know the ones I mean.

So music is pointless. Since this manifesto is about music, it’s also pointless.

But enough about wanking. Please take every word above as being absolutely literal and not open to any interpretation whatsoever. For I am an angry and vengeful, Old Testament kinda music-movement leader, rather than a lovingy, namby-pamby NT kind. We must be ever-vigilant in our battle with our nemesis, Pretendy Music. They have the radio, they have MTV, they have the big video budgets, they have the stylists and marketing and sales people getting their arse records on the shelves.

All we have is our passion and dyspepsia. And boxes of our unsold records under our beds. But once the Earth is obliterated, none of that will matter anyway, eh?

Together, we can make a band of mighty musical warriors, fearlessly singing about the real world! No shit!
love and kisses,
Jyoti