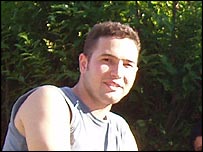 The documents and photographs confirm that Jean Charles was not carrying any bags, and was wearing a denim jacket, not a bulky winter coat, as had previously been claimed.

He was behaving normally, and did not vault the barriers, even stopping to pick up a free newspaper.

He started running when he saw a tube at the platform. Police had agreed they would shoot a suspect if he ran.

The document said: “At some point near the bottom he is seen to run across the concourse and enter the carriage before sitting in an available seat.
(Source: ITV)

Look at the photo above, if you can bear to. Does that look like a suspiciously heavy coat to you? Or does it in fact look like a thin denim jacket?

That body lying there could be you.

We currently have a trigger-happy police force who are sanctioned by our increasingly repressive government to shoot first. It’s not even ‘shoot first, ask questions later’ – there are no questions being asked. Everything is simply hushed-up in the great Blairite whitewash, the same amazing blindness that doesn’t see 100,000 Iraqi dead.

So, we have the police version: Asian man, vaulting barriers, heavy coat, refused to stop when shouted at.

And then we have the truth, as seen in the pic. A Brazilian guy (quite pale in appearance compared to me), light jacket, no bag, no vaulting. No refusals. Just ran to get his seat on the train.

No doubt our wonderful mainstream media and government of mass-murderers will find a way to justify this murder.

Perhaps they’ll issue new edicts – no running for trains unless you’re very white and have an ID card? How about no running anywhere at any time unless vetted by MI5 and the local police first? Surely it’s reasonable to ban all running in our great war against terror?

After all, we must protect our freedoms from the evil terrorists hellbent on destroying our liberty!

And how do we protect our freedoms? It’s obvious! WE MUST REMOVE THEM ALL, ONE BY ONE!

We must have constant surveillance by CCTV and intelligence agencies, we must have ID cards (eventually we’ll have microchips implanted, of course) we must have police death squads who shoot random citizens whenever the urge overcomes them. No questions asked. To question the police or our government is to side with the terrorists!

We must KEEP QUIET!
We must NOT QUESTION ANY ACTION THE POLICE CHOOSE TO TAKE (INCLUDING MURDER).
We must BE OBEDIENT CITIZENS IN THE WAR AGAINST TERROR!

Twenty-one years late but, sadly, this is all coming true more horrifically every day.