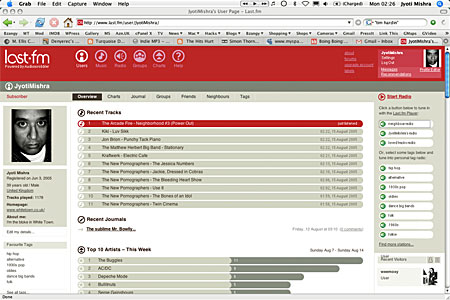 Last.fm is a streaming net radio station that plays music based on your own tastes. How does it work this magic? Well, it used to be an adjunct to AudioScrobbler, a site where, after installing a wee plugin that monitored your WinAmp/iTunes playlist, you could collate your musical interests. And, more importantly, find neighbours with similar playlists which is always a great way to discover new music.

The old AudioScrobbler site has now apparently gone, revamped and replaced by a swish new Last.fm frontpage. First impressions: it’s much easier on the eye and I like the way all the sections are laid out. I sometimes get a bit confused between the personal groups button and the metagroups but that’s probably just me.

Of course, I’ve gone ego-surfing and spied on who’s been listening to my music. Hey – wouldn’t you? 😉

I’ve started a few fan groups but there’s nowt but me and tumbleweed on them so far. I guess that Anthony Newley and Telex aren’t that popular at the moment. Though they should be, goddammit!

So, if you’ve never used Last.fm or you tinkered with AudioScrobbler for a bit then lost interest, have a look at the site again. Pretty soon, if you’re as geeky as me, you’ll be sucked in by the sheer statistical glory of it all. Plus, it’s always fun spying on other people’s music tastes.