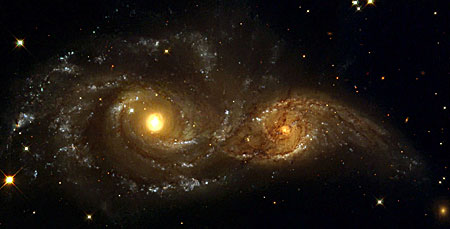 In the direction of the constellation Canis Major, two spiral galaxies pass by each other like majestic ships in the night. The near-collision has been caught in images taken by NASA’s Hubble Space Telescope and its Wide Field Planetary Camera 2.

The larger and more massive galaxy is cataloged as NGC 2207 (on the left in the Hubble Heritage image), and the smaller one on the right is IC 2163. Strong tidal forces from NGC 2207 have distorted the shape of IC 2163, flinging out stars and gas into long streamers stretching out a hundred thousand light-years toward the right-hand edge of the image.
(Source: HubbleSite)

I found the above pic at the Hubble Heritage Image Gallery.

Have a look through the gallery. It’ll hopefully give you a different perspective on our everyday, mundane problems. In the gallery you’ll see galaxies colliding, stars blowing themselves to smithereens and nurseries full of baby suns. A lot of the images are from millions/billions of light years away and hence, millions/billions of years ago. When those events actually ocurred, the human species didn’t even exist.

In the last half a million years, we’ve managed to scrabble from mastering fire to mastering nuclear fission. Yet our behaviour remains as atavistically brutal and tribal as ever. Our technologies have evolved but our brains haven’t. We remain divided by idiotic superstitions, economic systems and superficialities of appearance.

Look at the Hubble images, the enormity of the universe. Is it likely that some deity put all that there merely so we could argue about what we do with our genitals, what foods to eat or how to cut our hair? Religion is the greatest arrogance and folly of humanity. Only those people who don’t have even an impression of how big the universe is could possibly believe its creation was dedicated to the human race.

I wonder if anyone anywhere in the universe will ever notice if a small blue planet suddenly darkens and is consumed by nuclear fires. After all, the species that briefly dominated that planet technologically probably never even collaborated long enough to colonise their moon, let alone leave their tiny solar system. They spent all their energies bombing each other, each faction proclaiming their unique access to “truth” and “God.”

The passing of the Earth and its squabbling, delusional, fanatical apes will be a spectacularly unimportant event.