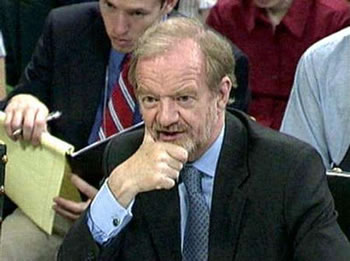 Just heard the sad news that Robin Cook MP has passed away. Here are extracts from his resignation speech:

I have chosen to address the House first on why I cannot support a war without international agreement or domestic support.

We delude ourselves if we think that the degree of international hostility is all the result of President Chirac.

The reality is that Britain is being asked to embark on a war without agreement in any of the international bodies of which we are a leading partner – not NATO, not the European Union and, now, not the Security Council.

Our interests are best protected not by unilateral action but by multilateral agreement and a world order governed by rules.

None of us can predict the death toll of civilians from the forthcoming bombardment of Iraq, but the US warning of a bombing campaign that will “shock and awe” makes it likely that casualties will be numbered at least in the thousands.

Iraq’s military strength is now less than half its size than at the time of the last Gulf war.

Ironically, it is only because Iraq’s military forces are so weak that we can even contemplate its invasion. Some advocates of conflict claim that Saddam’s forces are so weak, so demoralised and so badly equipped that the war will be over in a few days. [All bold emphases in this quote are mine – the war rages on as I post this obituary, more than two years after Cook’s speech.]

We cannot base our military strategy on the assumption that Saddam is weak and at the same time justify pre-emptive action on the claim that he is a threat.

Iraq probably has no weapons of mass destruction in the commonly understood sense of the term – namely a credible device capable of being delivered against a strategic city target.

It probably still has biological toxins and battlefield chemical munitions, but it has had them since the 1980s when US companies sold Saddam anthrax agents and the then British Government approved chemical and munitions factories.

Why is it now so urgent that we should take military action to disarm a military capacity that has been there for 20 years, and which we helped to create?

Why is it necessary to resort to war this week, while Saddam’s ambition to complete his weapons programme is blocked by the presence of UN inspectors?

Only a couple of weeks ago, Hans Blix told the Security Council that the key remaining disarmament tasks could be completed within months.

I have heard it said that Iraq has had not months but 12 years in which to complete disarmament, and that our patience is exhausted.

Yet it is more than 30 years since resolution 242 called on Israel to withdraw from the occupied territories.

We do not express the same impatience with the persistent refusal of Israel to comply.

What has come to trouble me most over past weeks is the suspicion that if the hanging chads in Florida had gone the other way and Al Gore had been elected, we would not now be about to commit British troops.

Nothing could better demonstrate that they are wrong than for this House to stop the commitment of troops in a war that has neither international agreement nor domestic support.

I intend to join those tomorrow night who will vote against military action now. It is for that reason, and for that reason alone, and with a heavy heart, that I resign from the government.
(Source: BBC News)

The above are my biased extracts relating to Cook’s antiwar position. Please take the time to read his whole speech, by following the link above. He continued to fight Blair’s disastrous toadying to Bush, stating the antiwar case many times.

Robin Cook was a man who had risen to the highest level of government and yet resigned on a matter of principle. I can think of no better tribute to his character than the clear, calm speech above.