My fave pic of the night is the one above, of Sean going mardy mental.

Also, click here if you want to see some sixteen-year-old pics of the drummer from Bigfoot Memorial Ride. 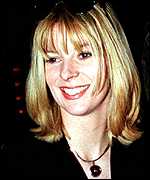 Five anti-war activists demonstrating against a ban on unauthorised protests near Parliament have been arrested.

A ban on protests within half-a-mile of Westminster which have not been cleared by police came into force at midnight.

Lauren Booth, sister of Tony Blair’s wife Cherie, joined the protest and said the law should be “overturned”.

“This is all about silencing critics of the war in Iraq and ID cards and denying people the right to free speech,” she said.

“If you heard on television that someone in another country were banned from gathering near a government building to stage a legitimate protest you would probably think thank goodness that kind of thing doesn’t happen in this country.”
(Source: BBC News)

Our democratic government doesn’t want to hear us protesting. It doesn’t care what we have to say. One and a half million of us can clog the streets of London, saying ‘NO WAR’ and they still take us into war. Not even a referendum, just Blair attaching his lips to Bush’s arse.

Instead of freedom, instead of democracy, they’re trying to tag us, ID us, watch us, control us and bully us into passivity.