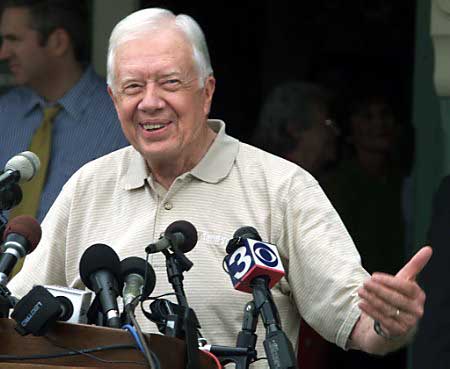 BIRMINGHAM, England — Former President Carter said Saturday the detention of terror suspects at the Guantanamo Bay Naval base was an embarrassment and had given extremists an excuse to attack the United States.

“I think what’s going on in Guantanamo Bay and other places is a disgrace to the U.S.A.,” he told a news conference at the Baptist World Alliance’s centenary conference in Birmingham, England. “I wouldn’t say it’s the cause of terrorism, but it has given impetus and excuses to potential terrorists to lash out at our country and justify their despicable acts.”
(Source: Common Dreams)

Hmmm, so former US President and Nobel Peace Prize winner Jimmy Carter is also against the current nutty US government’s actions? Like John Major, Carter isn’t some beatnik Trot, marching down Tooting High Street in his Che shirt.

These awkward blighters do keep cropping up, don’t they, people on the right of the political spectrum who are so appalled at Bush and Blair’s disaster in Iraq that they have to speak out?

This doesn’t happen that often. It’d be much easier for these ex-politicos to sit on their arses, passing no comment.

But they’re not blind. They can see the increase in terrorist attacks that Bush’s adventure in Iraq has provoked. Fallujah, Guantanamo, Abu Ghraib, children kidnapped by the US military, innocents hooded before being tortured to death, Carter sees how the US is perceived in the world outside its borders.

He knows that these policies have funnelled money and recruits towards insane organisations like Al Quaeda. And now British civilians are dying because of that increase in terror.

If only our government and media would acknowledge that truth.

Carter, who won the 2002 Nobel Peace Prize, has been an outspoken critic of the Iraq war.

“I thought then, and I think now, that the invasion of Iraq was unnecessary and unjust. And I think the premises on which it was launched were false,” he said Saturday.
(Source: Common Dreams)