(This pic is nicked from UK Resistance. Send them your money)

I am so fucking bored of all the war games out there. Especially since all the non-WWII games seem to be from the viewpoint of white Americans shooting brown/black/yellow people in the head from a great distance away.

Can you imagine a war game from the other point of view? Where you’re a terrorist stalking some comfy white suburb? How tasteful would that be? Would gamers still cheer as they blew up busloads of kids and grannies?

Video war games are training courses in imperialism. They use the latest tech to transport us into 19th century morality where the only race that counts is white. Everyone else is subhuman. 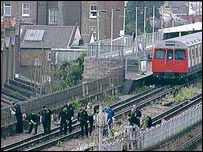 A massive hunt is under way for four would-be suicide bombers who tried to set off four explosive devices on three London Tube trains and a bus.

Streets were cordoned off, parts of the transport network closed and stations evacuated, but no-one was badly hurt.

Three of the devices are the same size and weight as those used for the 7 July London bombings. The same chemicals also appear to have been used.
(Source: BBC News)

Have a read of the full article, linked above. Those are the facts, as far as we know.

Four bombs misfire? The would-be-murderers who carried them are forced to leggit? What are the odds of four devices all being being duds?

When I first heard the confused reports about this attack yesterday, I thought it must be some idiots setting off “comedy” bombs or trying to make some asinine point.

But it looks like it was a genuine attack that went wrong.

How lucky are we today? We could have scores more dead and injured on our hands. Think of all the innocent people walking around now who might otherwise not be here?

Then another thought struck me: perhaps it’s not luck. Perhaps one of the people in whichever terrorist group planned this had second thoughts. Perhaps he or she stopped to think of all the lives they’d be destroying and deliberately sabotaged the devices. If so, thank you, whoever you are.

Maybe yesterday was the tip of the iceberg. Maybe our security services managed to defuse these devices somewhere along the line but wanted to reel in the people prepared to carry them?

Whatever happened, I feel elated that no lives have been lost. I could have woken up today to the aftermath of another London attack, photos of the dead on telly.

Today could have been very different.

UPDATE:
Just watched an explosives expert on the telly and he said that if the explosives had been made at the same time as the batch used in the 7/7 attacks, it’s very probably that they’ve degraded beyond function now. So, ignore all my conspiracy theories above!