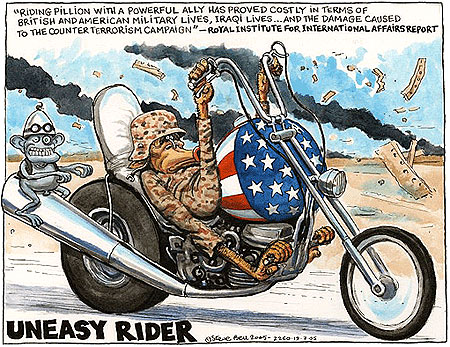 Two-thirds of Britons believe there is a link between Tony Blair’s decision to invade Iraq and the London bombings despite government claims to the contrary, according to a Guardian/ICM poll published today.

The poll makes it clear that voters believe further attacks in Britain by suicide bombers are also inevitable, with 75% of those responding saying there will be more attacks.
(Source: The Guardian)

Despite all New Labour’s spin doctors, despite the toothless mass media, despite a barrage of disinformation, distortion and outright lies from Labour hacks like John Reid, Britons know what’s going on.

We know we’re now paying the price for our support of Bush and the PNAC plan for American global domination.

We know the illegal invasion of Iraq had nothing to do with WMDs or even removing Saddam. It was all about oil and power. If the welfare of ordinary Iraqis had been a priority, wouldn’t the US have counted how many of them it killed for a start? And would Iraq be the hellhole it is today?

We know we’ll probably be attacked again by murderers who share the same insane religious fundamentalism as Bush and Blair.

Whether we’re Britons or Iraqis, we’re just the ordinary people caught in the crossfire between these lunatics.