A month ago, I posted this.

Just a moment ago, I got this email:

We are pleased to tell you that the pledge you signed up to has been a success.

The pledge, created by Phil Booth, reads: ‘I will refuse to register for an ID card and will donate £10 to a legal defence fund but only if 10000 other people will also make this same pledge.’ The 10001st person has signed the pledge, just moments ago.

On Thursday, I took part in the two minute silence for the murdered innocents of the 7/7 London bombings.

It was sunny here and it felt quite horrible that outside the weather looked so gorgeous, so full of buzzing insects and bursting with life and yet the 54 people we were honouring will never see this summer. Think of their families, the hell they must be going through. Why are these people dead? Because of the evil of religious fundamentalism. Because of people believing that human life is worthless, that blowing up civilians can be a legitimate act of war.

As I’ve said before, I’m not a pacifist. I’ve been in fights and defended myself. If my family or I were attacked, I’d certainly respond. If this country was invaded, even though I’m physically unfit, I’d do my best to fight the invaders and protect my home.

If someone attacks you I don’t believe it’s morally wrong to fight back.

But tell me – who had these innocent Londoners attacked? They were from all classes, all walks of life, all religions. They weren’t a military force, they weren’t generals or politicians, they had nothing to do with any of the carnage in Iraq.

And then I thought – 2 minutes of national silence for 54 murdered civilians. What if we applied that to the civilians we killed in Iraq? I don’t mean Saddam’s troops or “insurgents,” I mean ordinary people, cowering in terror in their houses as the US and UK bombs fell on them. I mean the ordinary people of Fallujah, caught in the crossfire between “insurgents” and “liberators.”

In Iraq, we didn’t kill 5 or 10 or even 100 times as many people as were killed in London. We killed 1,852 times more people. Therefore, if we honour those innocents in the same manner, we should have a national silence that lasts 3,704 minutes.

We would have to stand in silence for 62 hours.

But somehow, I can’t see Blair leading that silence, can you? 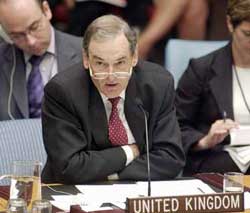 A controversial fly-on-the wall account of the Iraq war by one of Britain’s most senior former diplomats has been blocked by Downing Street and the Foreign Office.

Publication of The Costs of War by Sir Jeremy Greenstock, UK ambassador to the UN during the build-up to the 2003 war and the Prime Minister’s special envoy to Iraq in its aftermath, has been halted. In an extract seen by The Observer, Greenstock describes the American decision to go to war as ‘politically illegitimate’ and says that UN negotiations ‘never rose over the level of awkward diversion for the US administration’. Although he admits that ‘honourable decisions’ were made to remove the threat of Saddam, the opportunities of the post-conflict period were ‘dissipated in poor policy analysis and narrow-minded execution’.
(Source: The Guardian)

So, one of the British government’s most senior diplomats thinks that Bush and Blair’s bloodletting in Iraq was “politically illegitimate,” eh?

Blair and his cohort of fellow war criminals are doing their best to sit on the truth. But it keeps struggling free. How is Blair going to hide the pile of 100,000 dead Iraqis he helped to create? How is he going to keep the daily carnage in Iraq now taking place off the news?

Everyday in Iraq now is like the 7/7 London terrorist attacks. The country reels from one atrocity to another. When the invasion took place, securing Iraq was not a priority. Securing the oilfields was. And you see the result of the US and UK’s decisions in the blood on Iraq’s streets today.

Butcher Blair can keep on trying to keep his lies to Parliament hidden but there are millions of us who know the truth. 45 minutes from attack? Massive stockpiles of WMDs? Serious threat to Britain?

The person who has most hurt Britain’s security in the last two years is Tony Blair. He has singlehandedly put us on the terrorist map.