British and American aid intended for Iraq’s hard-pressed police service is being diverted to paramilitary commando units accused of widespread human rights abuses, including torture and extra-judicial killings, The Observer can reveal.

· A ‘ghost’ network of secret detention centres across the country, inaccessible to human rights organisations, where torture is taking place.

· Compelling evidence of widespread use of violent interrogation methods including hanging by the arms, burnings, beatings, the use of electric shocks and sexual abuse.

· Claims that serious abuse has taken place within the walls of the Iraqi government’s own Ministry of the Interior.

· Apparent co-operation between unofficial and official detention facilities, and evidence of extra-judicial executions by the police.
(Source: The Observer)

One of two grim stories I found while I was away. If you want to read the second story, click here, but I warn you, it’s disturbing reading.

The US government should be pleased by this report: it shows their puppet regime is emulating their sterling work at Abu Ghraib and Guantanamo. The new Iraq is a model US democracy!

Here are my results: 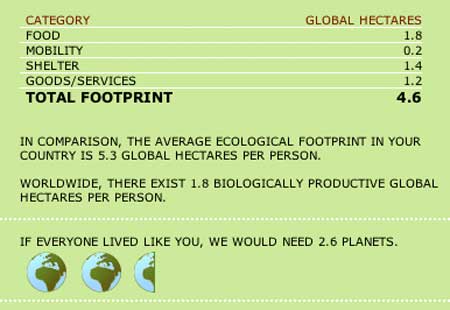 Shows how shitly I’m doing at not wrecking the planet, eh?