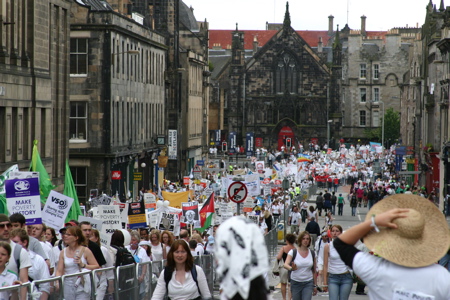 Phew! What a day! The official estimates say there were around 225,000 of us in Edinburgh protesting. Personally, it felt like more than that, comparing it to some of the Stop The War demos I’ve been on. Put it this way: Ele and I arrived in The Meadows at 11.15 but we were queuing till 3.15 just to leave the park, so many people turned up. We joined the Stop The War contingent and spent two hours staring at the back of some portaloos before actually getting out into the city centre.

We didn’t know at the time but by 1pm, marchers were arriving back at the park having done the circular route which made an enormous white band around Edinburgh. 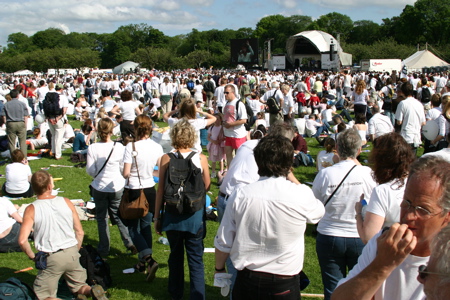 We managed to meet up with Cactus and even Keyvan, despite the mobile networks going down sporadically due to being so overloaded.

The soles of my feet are the colour of lobsters but I’m so glad we took part in this amazing, once in a lifetime event. It was a fantastic, very moving day.