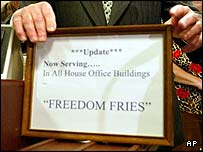 A pro-Iraq war US congressman who campaigned for French fries to be renamed “freedom fries” is now calling for US troops to return home from Iraq.

“I voted for the resolution to commit the troops, and I feel that we’ve done about as much as we can do,” Mr [Walter] Jones said on US network ABC.

“I just feel that the reason of going in for weapons of mass destruction, the ability of the Iraqis to make a nuclear weapon, that’s all been proven that it was never there.”
(Source: BBC News)

Again, too little far too late.

This sabre-rattler joined in the howling bloodlust of the USA, dooming over 100,000 Iraqis to a grisly death. Now he sees the error of his ways and admits that the reasons the US was goaded into war were all lies. It’s a pity he didn’t experience this revelation before his country carried out mass-murder.

Will we ever hear Butcher Blair or his pro-war cronies like Geoff Hoon issue a similar apology? I doubt it.