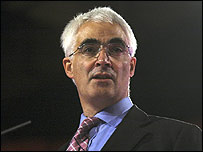 Alistair Darling’s proposal might sound green, but it makes no sense to reduce fuel taxes so that gas guzzling 4×4 vehicles can pay almost the same to drive as a mini. We need higher charges for bigger engine vehicles to deter polluting vehicles, and should be planning for traffic reduction, not a technocratic solution which involves just moving traffic off one road and onto another.
(Source: The Green Party)

I had an email from Matt at Non-Tech City this morning. You can read an expanded version by clicking here.

I’ve also had a few reactions to my previous rant about the new government surveillance scheme. Some people think I’m being overly paranoid and that the government just wants to tackle pollution and congestion – something has to be done.

But, as The Green Party point out above, these new proposals won’t combat either problem. If you truly wanted to tax inefficient cars more, the mechanism is already there via Road Tax. Just make a steeper curve for increasing engine sizes. People could still drive huge, lumbering gas-guzzlers but they’d be penalised appropriately. It’d be nice if the money from this eco-charge was then put into improving public transport rather than bombing civilians but Mr. Blair has his own set of priorities.

As for congestion, how will the proposed surveillance change that? Say some roads are going to be more expensive to travel on, will those drivers all think, “Ahh! I’ll take the train instead! It’ll only cost me £100 more than driving!” Of course not. They’ll either pay the toll or choose another, cheaper road. Perhaps a less direct road that uses more petrol. Imagine the sleepy villages that will suddenly become racetracks for cost-conscious drivers.

So, the new scheme won’t reduce pollution (may increase it) or congestion (it’ll create new hotspots). The only thing we can be sure it will reduce is our civil liberty.

I repeat: do you trust this government, any government, to track every single car journey you make? This is an un-precendented level of invasion of privacy.