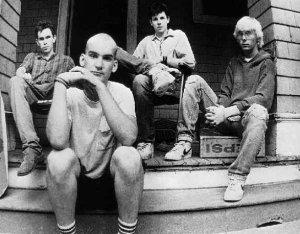 (This is an article I did for Sandman Magazine)

Gather round, my beloved karass, and let me tell of olden times when it was all vinyl and Strawberry Story badges round here, when men were boys and girls used to hold their coats at the back of gigs, simpering like mute toddlers. Okay, perhaps it was a bit rubbish, remembering “the scene” without the honey glaze of nostalgia.

But one thing was better: DIY.

By which I don’t mean shelves, I mean DIY as in music, as in the ethic that was born with punk and then blossomed in the hundreds of tiny post-punk and indie labels.

Here’s how it was: if you’ve got an idea, form a band, hit your guitars a bit, book a gig, play. Hell, if you can’t be arsed to learn the guitar, prod some keyboards. All that counts is the idea, not technique. Technique is for Dire Straits. If you’re not a musician, take pics, write fanzines (yep, PAPER fanzines), become a label. It’s not rocket science, it’s not high commerce, it’s music, it’s art. And it shouldn’t be in the hands of a business or media elite. It’s ours, not theirs.

Here’s how it is now:

How do we get signed? I wanna get signed. I want to be be famous. What for? Dunno. Ummm… what music shall we make? Dunno – what’s on the front cover of the NME this week? We just go to our mates’ gigs, fuck everyone else. How do we get signed? Bands aren’t real bands unless they’re on MegaCorp Records. What do you mean art? Ideas? So…can you get us signed?

Can you spot the subtle difference?

Of course, the above is a poor satire, an eggy exaggeration. But not by much. There seems to be a huge, flummying layer of passivity in a lot of musicians nowadays.

What’s superstring strange about this is that so much is easier now. Bear with me…

I released the first White Town single because no other bugger wanted to. It cost around £800 for a thousand 7”s. I had to sort out the (minimal) artwork, test pressings, liase with the pressing plant. That 7” lead me to other labels, it was a teeny musical virus travelling round the world on my behalf. Making a CD was just a fevered wet dream at that stage, beyond the reach of ordinary indie mortals. CD mastering, glass wotsits, all arcane technomagic to me.

Now, practically every Western musician has access to a computer that can burn a CDR. Even if you’re too skint to have your own computer, schools, Unis and community music courses will let you tinker.

Where are the CDR labels? Why aren’t bands selling CDRs at gigs? Why aren’t people releasing CDRs of bands they love, not as one-offs or giveaways but as little labels of love? There seems to be a snobbery against CDRs, that they’re not posh enough to sell. My god, if I could have bought a simple, CD-quality release in 1989, I’d have one less kidney now.

From my grumpy old bloke perspective, it seems a lot musicians are sitting round, waiting for permission to exist, to release music. Instead of gigging and releasing albums, they wait for the glorious big break. Instead of forming their own labels, they want the clout of a major behind them. Imagine if the people behind Dischord, Chemikal Underground and so many other indie labels had thought the same. What bands wouldn’t we have heard?

What I’d love to see is an explosion of DIY. I’d love to see people starting up labels, web/fanzines, bands, art movements for no other reason than PURE FUCKING FUN. Not as a step towards a career as a TV presenter or writing inaccurate reviews for the grown-up papers.

I want people to reclaim music from the corporations who see it as simply a “cool” way to sell more cans of carbonated cack. Technology bludgeons us every day, it’s time we mastered it and used it to our advantage. The possibility for positive musical communities, collaboration and organisation has never been greater.

Maybe you’re thinking, ‘Hey I do all that! With my clubnight, my band, my studio, my zine, my skiffle masterclass, MY HAIR!’ Well, good for you, chubby chops. None of the above is aimed at you.

But if you’re a musician waiting for fame, what are you waiting for? No-one, least of all corporate capital, can validate your art. You either are a musician or you aren’t. Simple. Or, as the little green fella said:

UPDATE:
Have a look here for a reaction to my article.