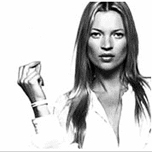 White wristbands sold by the Make Poverty History coalition were made in Chinese factories accused of using forced labour, it has been disclosed.
(Source: The Independent)

You would think the three charities involved would have taken great care sourcing the wristbands. Apparently not.

Have a read of the full story, link above, for some class stupidity. Laura Veirs is a tiny dynamine, a songwriter who has, in the space of a few years, found her own voice and style. Her 2004 album, ‘Carbon Glacier’ is a dazzling fusion of trad American blues/folk with more off-kilter, European melodies. The Independent called it the “most enthralling album of the year thus far.”

Laura graciously agreed to do an email interview with me.

1. When you wrote the line:

“Gonna dig a coal mine, climb down deep inside”
What was going through your mind? Was it escape or actually confrontation?

I adapted the lyrics of “shadow blues” from karl blau’s song “shadow”. In his song he says, “gonna dig the deepest coal mine, that’s where you’ll find my shadow.” So I was just adapting his words and mushing them around to suit my song. It’s interesting to think of a place where your shadow can hide in darkness.

2. Generally In Britain, your genre label is “Americana” which I find about as useless a descriptive term as “Electronica.” I also think your melodies are more Eastern-European (in places) than more blues-derived folk. Is what I’m saying rubbish?

I agree that the Americana label is rather useless in my case. I’ve been steadily moving away from folk/country-influenced songs. I hope that people can find new terms to describe what I’m doing, especially with my upcoming album which has more electric guitar, drums and feedback than I’ve dealt with since my punk days.

I see what you’re saying about the eastern-european melodies – I have no idea where these are coming from though, as I have listened to very little of this kind of music. (Although recently I’ve really been enjoying an album of Bulgarian women folksingers; I love the unusual intervals they use for vocal harmonies.)

3. I’ve only met you once (at the Derby Reveal gig) and you seemed quite shy then. Would you class yourself as a shy person? If so, is performing a release or an ordeal. Or both?

When I’m with my peeps I’m a real ham. And sometimes on stage I really shine. But generally I’ve gotten more shy in recent years, probably since I’m performing all the time and when I’m just hanging around people I’d rather see what they have to say. I’m certainly introspective. But I’m funny too. Performing is strange. Sometimes it’s wonderful and transcendent and other times I’m distressed and want to leave the stage. It’s really unpredictable for me.

Oh yes, delighted! I love the way he’s catering to the ultra-rich, screwing up social security, killing innocent people in the middle east (elect and oil man and you’ll get more access to oil), destroying the environment, threatening abortion and gay rights and flushing subsidized medical care down the toilet. It makes me consider moving to Europe… no, I will stick it out over here. But it’s scary!

5. The final lines of ‘Rapture’ are questioning but the body of the lyrics tend more towards creativity as a curse than a blessing. Is this how you feel about your own songwriting?

Overall it’s a blessing to be a songwriter. But it’s a real struggle to create art, for me personally, and for artists generally. You have to wrench something out of nothing and that’s never easy.

6. All of a sudden, Laura Veirs becomes the hip artist to name-drop at all the in-parties in London, New York and Paris. You’re invited to glitzy film premieres and christenings of submarines. Would you go?

Sure I would go! But I’m not a schmoozer so people would have to deal with the real me, who is nothing close to glitzy or glamorous.

7. Coca Cola want to use ‘Icebound Stream’ as the bed in a huge new TV campaign. Yes or no?

No. I don’t like Coca Cola, their practices or their product.

I am still obsessing over Joanna newsom’s 2004 record. That one really blew my mind.

9. What’s the best non-fiction book you’ve read in the past year?

“how to cook a wolf.” A strange cookbook from quirky WWII-era housewife.

10. When I’m writing songs, I often sing bits of nonsense that actually turn out to mean something, then I add bits that focus the lyric. Do you work in a similar way or do you start with more fixed, prepared lyrics?

Lately I’ve been grabbing lyrical ideas from stream of consciousness writing that I do on the road. Sometimes it makes perfect sense to me what the songs are about, and other times I don’t really know for sure but I like the way the words sound together and the way they compliment the melody.

Great questions. Have fun! All the best, laura