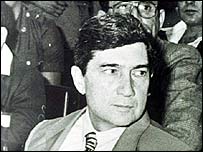 Declassified US government documents show that a man suspected of involvement in the bombing of a Cuban passenger plane worked for the CIA.

Luis Posada Carriles, a Cuban-born Venezuelan and anti-Castro dissident, was an agent and informer.

The papers also reveal that an FBI informer “all but admitted” that Mr Posada was one of those behind the 1976 bombing that killed 73 people.

Mr Posada, who denies any involvement, is said to be seeking asylum in the US.

His lawyer says his client, thought to be in hiding in the Miami area, deserves US protection because of his long years of service to the country.
(Source: BBC News)

How the US government poses and struts, whinnying about “rogue states” and “terrorists.” All the while, their agencies sponsor terrorism worldwide against regimes they dislike. And their military invades any country it pleases, massacreing civilians and torturing survivors with impunity.

You won’t see the above report on major TV news bulletins. It won’t be deemed “important.”

It would only be important if the terrorist was a Muslim or a Communist. Then, the US would trumpet it’s repugnance of this bombing. It would probably use similar documents to justify another invasion of a country with plenty of oil.

Look at the quality of Posada, that defender of The American Way:

One FBI report quoted a confidential source as saying that Mr Posada was one of several people who met at least twice at a hotel in Caracas, allegedly to discuss bombing a Cubana airlines plane.

The report recommended that no action be taken on the information, as it would compromise its source.

Mr Posada was arrested in Venezuela after the bombing, but was not convicted before he escaped from prison.

The US documents show that he later went to central America, where he joined the covert US operation, led by Lt Col Oliver North, to rearm the anti-communist Contra guerrillas.

Mr Posada once boasted of being responsible for a series of bomb attacks on Havana tourist spots in the 1990s.
(Source: BBC News)

Wonderful reading, isn’t it? Bombings, arming terrorists, organising assassinations. And this is the country that’s meant to be the champion of global freedom and democracy?

Imagine being on that plane, the few seconds you may have had, the horror of realising your were going to die. But, as always, when the US slaughters people, those lives don’t count.

No-one will be brought to justice and the 73 innocents murdered by the CIA will be airbrushed out of the grand fairytale the US weaves about itself.