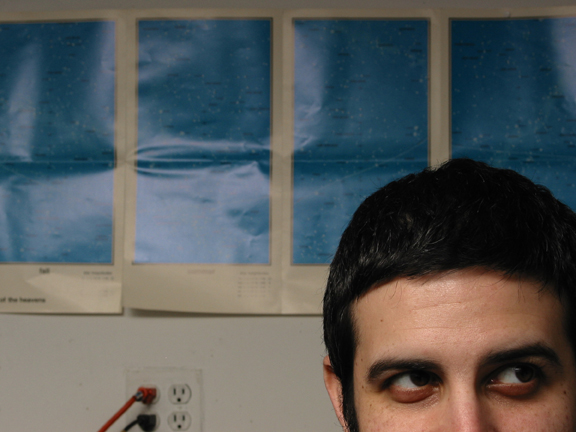 Say Hi To Your Mom (pic by M. Vorrassi)

Say Hi To Your Mom made my favourite record of last year.

Their new album, ‘Ferocious Mopes,’ will be released on June 7th but you uber-hipsters can have a sneak preview by clicking here. Looks like it’s going to be another tasty treat.

Eric Elbogen, the SHTYM primary node, graciously agreed to do an interview for Bzangy Groink. And here it is! Enjoy!

1. What is Say Hi To Your Mom band? Is it Eric Elbogen + others for gigs or is it a collaborative creative project? Who does all the songwriting? Arranging? Tea-making?

I’ve done everything on the three records. Because I can’t afford the proper components for robots to recreate the music live, I’ve been forced to hire actual, fleshy human beings.

Sometimes the humans end up being pleasant, sometimes not. I’m thinking of incorporating some of the pleasant ones when I start the fourth record.

Ferocious Mopes comes out on June 7th. It’s thematically dark, sometimes funny, lushly produced, cryptic, catchy and intimate. At least that’s what I tried to do with it. There’s another robot on the cover: 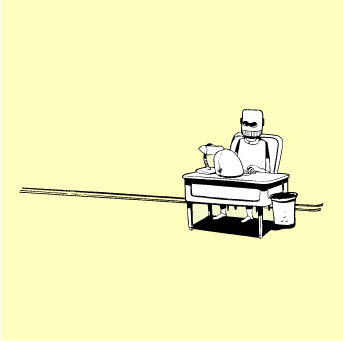 3. I think my favourite thing of all about SHTYM is your lyrics. Are they as autobiographical as they seem or are you a great fiction writer?

Fiction. Always fiction. Autobiographies are boring and I’m sick of listening to people sing about their generic lives.

4. Lyrically, who are your favourite songwriters?

5. I would never have heard about SHTYM if I hadn’t found your songs floating round the the cyberwent. The internet – good or bad for SHTYM?

The internet is great for Say Hi. I can’t imagine existing without the www and many Say Hi listeners would not have found out about the band without it.

That said, I really wish people would stop stealing my records from file sharing outlets.

I understand and appreciate the function of such technology. It would just be cool if people bought the record or a t-shirt if they download the music and enjoy it.

There is very little money in indie rock and I work very very hard to function as a professional musician and make good records.

It feels really bad when you encounter people getting your records for free, knowing how much work went into them. If someone really doesn’t have the money, I’d be willing to trade a record for something of equal or greater value, like a bunch of unused undergarments or a toaster.

I don’t currently have a toaster.

6. I think tracks like ‘Pop Music’ and ‘Laundry’ sound like films, they have a certain flowing, rich narrative. Have you made any films? Would you like to?

I haven’t made films. I applied to film school in college but didn’t get in. It was probably a blessing in disguise, because studying literature and writing really helped my craft.

7. Of the following, choose one of each pair:

Copenhagen or multiverse?
Cyclohexane or dichloromethane?
TV or bowling?
Sharks or tigers?
Nuns or cheese?
Emo or indie?

Multiverse
The Occasional Hydrocodone
Bowling With The Cast Of A Popular TV Show
Tigersharks
Nuns Covered In Cheese
The latter, definitely. Although I’m thinking of using ‘Brian Emo’ as one of my pseudonyms. Either that or ‘Stevie Blunder.’

8. You’ve so far released all your music on Euphobia, your own label. Would you consider signing to another label, indie or major?

Yes. It’s time to be on a label. I spend all my time stamping and stuffing bubble mailers, an object I’d be content never to see again. I’ve also pretty much maxed out all my credit cards. Bubble mailers and maxed out credit cards are the two dominant ingredients in owning a record label, a fact anyone who owns a label will surely attest to.

The difference between me and them, however, is that I don’t yet have any interns. Does anyone want to be an intern? I am, however, very content that I’ve done things myself thus far. I keep telling other bands to do the same, instead of waiting for a magical label to improve their lives.

Like I said, however, I’d rather be spending my time on tour or making more records than stuffing bubble mailers right now. The problem is, there are only two record labels in the US I’d trust to put out my records and I haven’t been able to convince either of them to do so.

9. What have you got against cats?

Nothing. I’m just a little obsessed with death sometimes.

No. Unless your talking about the politics of the music industry. Then yes, because every band is political in that sense.

11. You become KING OF THE WORLD. What changes would you make? Would you abuse your position or become a benevolent dictator?

King of the World like the Italian kid from “Titanic?”

12. ‘Let’s Talk About Spaceships’ is key SHTYM for me: funny, sad and acerbic all in the one song. It’s an amazing pop song. Why do you think so much contemporary pop songwriting is pure shite? Does it make you feel lonely?

There are good bands out there. At least enough to fill my 40 gig iPod. Sometimes you just have to dig a little harder.

13. I’m a one man band, I do everything – writing, recording, mastering, graphics, label. Sometimes that fucks me off and I’d love to just hand over everything non-musical to some nice, clean people. Do you ever feel the same about SHTYM?

14. Is Euphobia purely for SHTYM or have you/will you release other artists via it?

I’d like to release other bands at some point. I can’t afford it yet. I want to it right when I do, which means a hearty financial investment.

15. Can you make your living totally off SHTYM? Do you want to or would you rather do it the Scottish indie way and work to support the band, thus maintaining greater artistic freedom?

16. Every single person I’ve played SHTYM to has loved you. Whenever I DJ and play your stuff, I get people coming up asking what band I just played. You make excellent, hyper-catchy pop music so you should be a megastar. Are you prepared for that? Do you want that?

17. What’s with the exploding drummers?

I should stop feeding them gasoline.

18. Would you ever consider writing more mainstream pop for other artists? If Britney / Christina wanted a sprinkle of your magical pop semen, would you oblige?

Yeah, sure. I might end up using one of my aforementioned pseudonyms though.

20. In bourgeois democratic societies, does the self-censorship of songwriters make them complicit in the ideological hegemony of the ruling class?

Pop Tarts sure are tasty.

A big thanks to Eric for the interview!

Please visit SHTYM’s website, email Eric (he’s a friendly bloke, he won’t bite!) and then buy all his records.