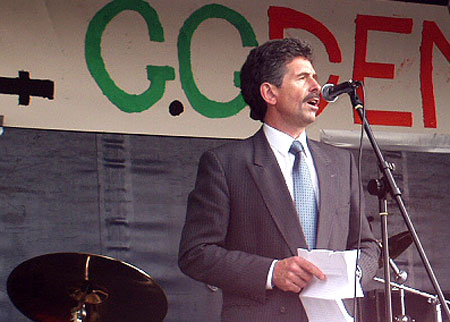 Blair deceived Parliament into backing an illegal war. Blair flouted our constitutional tradition of collective cabinet responsibility. Blair crawled to the most ill-qualified American President in living memory. Bush constantly makes political capital out of Blair’s support for him. A vote for Blair is a vote for Bush. What a splendid signal the voters of Sedgefield could send the world if they elected Reg Keys.
(Source: The Independent)

Richard Dawkins strikes again! Isn’t it great that a scientist who can write books as fantastic as this also has his heart in the right place? He’s throwing the power of his celebrity as an academic and populariser of science behind Reg Keys campaign.

“Tony Blair led this country into an illegal war on the basis of weapons of mass destruction which did not exist, and he asks us, with his schoolboy grin, to put this behind us.

“I’m sorry Mr Blair, but there has to be accountability – you cannot just walk away from this with impunity. I am here to hold you to account for the human and material costs of this war.”
(Source: Reg Keys For Sedgefield)

Wouldn’t it be marvellous if Blair lost to Keys in Sedgefield and was out on his ear?