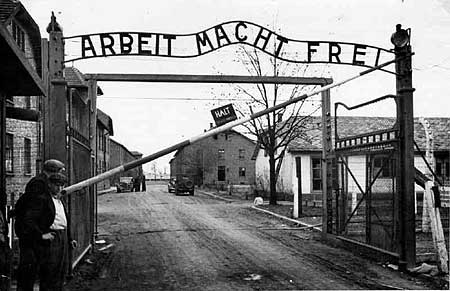 Hundreds of survivors of the Nazi concentration camps Bergen-Belsen, Ravensbrück and Sachsenhausen have marked the 60th anniversary of their liberation by Allied forces with ceremonies across Germany.

At Belsen yesterday, where an estimated 70,000 people died, mostly Jewish, ceremonies were held after more than 150 former inmates marked the camp’s liberation on Friday.
(Source: The Independent)

Pretty soon, the survivors of the camps will be gone. Then who will counter the neo-Nazis and other anti-semites when they deny the murder of millions? Who will say, “I was there, I saw it happen?”

How did the horror happen? Look around you today. There are politicians pointing fingers at travellers and refugees, immigrants and “ethnic minorities.” They’ll do anything to get votes. If racism sells, they’ll be hawking it. Look at the leathery, weasel face of Kilroy when he starts his ranting and tell me a little black moustache would look out of place. I think it would finish him off perfectly. But then, I would say that, being part of the swamping wave of immigrants.

I’ve quoted him before but I feel Bronowski hit the nail on the head here:

“There are two parts to the human dilemma. One is the belief that the end justifies the means. That push-button philosophy, that deliberate deafness to suffering has become the monster in the war machine. The other is the betrayal of the human spirit, the assertion of dogma that closes the mind and turns a nation, a civilisation, into a regiment of ghosts.”