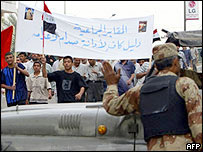 Insurgents have killed 15 Iraqi soldiers travelling in a convoy south of Baghdad, police and officials say.

The attack happened near the town of Latifiya, in a lawless area known as the “triangle of death”.

The violence came on the second anniversary of the fall of Baghdad to the US-led coalition.

Tens of thousands of Iraqis joined an anti-US protest in Firdus Square, where Saddam Hussein’s statue was toppled on 9 April 2003 as millions watched on TV.

I wonder if this anti-US protest will make the Western mass-media. I doubt it. If it does, I expect they’ll say the protest was tiny and insignificant. The opposite of the stage-managed statue-toppling hyped by the US media.

Iraq is in turmoil. When the US invaded, their priority was securing the oil industry. Law and order went to hell and, apparently, still remains there. Here’s the state of Iraq now:

The number of Iraqis murdered by the invading forces is probably above 100,000 by now, according the first scientific study of Iraqi deaths. There hasn’t been an official US tally of Iraqi deaths because the US doesn’t care how many Iraqis it kills. Here’s what the US military thinks of dead Iraqis: 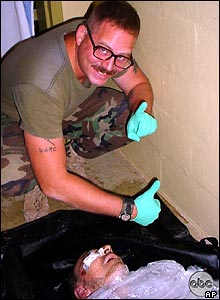 That’s a picture of a brave, noble US liberator. Makes you proud of our Western values, doesn’t it?

Is it any wonder Iraqis are out in their thousands protesting against the foreign invaders occupying their country? How would you feel if invaders bombed your country flat, reducing it to anarchy whilst making sure the oil was nice and safe? Wouldn’t you be suspicious of their motives?

Would you want 130,000 foreign troops occupying your country?