The Delgados, influential figures in Glasgow’s independent
music scene for over 10 years, have announced that they
are to amicably disband. The reason has been put down to
the departure of their bass player Stewart Henderson who
informed the band in the New Year that he did not wish to
make another album. The Delgados have always been known
as uniquely collaborative songwriters and as such, it was
decided that the band could not continue without all of
its original members.

The Delgados leave behind them 5 critically acclaimed
albums including The Great Eastern, Hate and last year’s
Universal Audio. Their two principal songwriters Emma
Pollock and Alun Woodward will be pursuing individual
projects and drummer Paul Savage will continue production
duties at the band’s Chem19 Studios in Hamilton.

The four friends will continue to run their record label
Chemikal Underground in this, its 10th Anniversary year,
with releases scheduled for Malcolm Middleton, Mother &
The Addicts and Arab Strap. They are extremely grateful
to everyone who has supported The Delgados over the course
of their career.

I just got the above email from Chemikal Underground. I thought the last Delgados album was their poppiest yet, full of lovely, catchy melodies.

Toynbee’s argument superficially restates the familiar pragmatic election-time advice about choosing the lesser of two evils – but is disturbingly predicated upon an assumption that evils done abroad, to people other than ourselves, should not be included in our calculations of relative evil.
(Source: MWNP)

Paul’s response is, as always, well worth reading. Click here for my take. 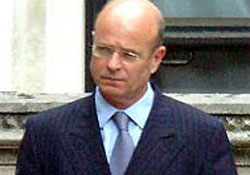 The intelligence officials who produced Tony Blair’s Iraq weapons dossier – the justification for war – have admitted that some of the main claims made in it were untrue.

The Joint Intelligence Committee (JIC), which produced the dossier under its chairman John Scarlett, was forced to carry out a review after the failure to find Saddam Hussein’s weapons of mass destruction after the occupation,.

The committee admits that a whole array of allegations – from Iraq’s supposed chemical, biological and nuclear capabilites to its ballistic missiles — were either “wrong” or “unsubstantiated”.
(Source: The Independent)

Have all the people responsible for these “untruths” lost their jobs? Or, in typical governmental fashion, have they merely had one less Digestive given to them with their cup of tea?

Think of all the Iraqis who died as a result of the JIC and Blair’s lies. All those dead bodies and, apparently, no-one is to blame…

If I’ve said something horrible to a friend or perhaps not fully checked the sources for a magazine article I’m writing, I worry about it. I lose sleep.

And yet, these people can be responsible for the death of hundreds of thousands and not even have the common decency to resign from their cushy posts.

Am I insane? Is there not one honourable person left in the entire British government?