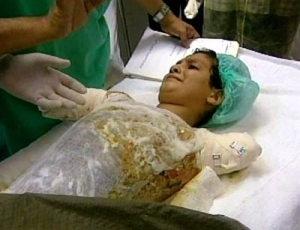 Just one of Tony Blair’s victims

So let no Labour voters think their vote too precious to cast for Blair. Revenge for a war that will never be repeated is a poor excuse. In our book Better or Worse? – Has Labour Delivered?, David Walker and I provide ample evidence of good done (alongside targets missed).
(Source: The Guardian)

My Dad sent me the link for the above article. Go and read it thoroughly before you return to my foaming bile.

In the quote above she says “a war that will never be repeated.” Oh yeah? So if we vote the poodle back in, he’ll suddenly develop a backbone and not support Bush when/if he wants to invade Iran/Syria/another oil-rich country? Can you imagine Blair standing up to Bush’s warmongering?

Blair must be removed from office, removed from the Labour party and thrown in jail. If Blair is re-elected, the smug killer will take that as a sign that he can do anything he wants. He will believe he’s untouchable.

I’m having to restrain myself hugely here. My hands want to type a stream of the worst swear words I know, interspersed with Toynbee’s name and Goering. Instead, I’ll write what I’m hearing:

Toynbee: “Yes, yes, we must accept that Mr. Hitler was perhaps hasty in his gassing of millions of Jews, homosexuals, Gypsies and communists. Perhaps he was a bit premature in invading every country around him. But he genuinely thought the safety of the Fatherland was at stake! People, mein Volk, let us not forget all of Mr. Hitler’s great achievements! Who else could have built all those lovely autobahns? Who else could have brought order to Germany after the disaster of Versailles? Who else could have made the trains run on time? And wasn’t the Olympics a spiffing show? Let us judge Mr. Hitler not on his slightly non-optimal foreign relations but on his domestic performance! He did many, many great things! Vote Hitler!

Tony Blair is a war criminal in exactly the same way Hitler was. He took Britain into an illegal invasion of a country that was posing no threat to us whatsoever. He lied to Parliament and the British people. As a direct result of Tony Blair’s lies, over 100,000 Iraqis are now dead.

And Toynbee is suggesting we should just ignore that slight error and vote for the murdering fucker anyway because mortgage rates have been pretty calm.

Could she be any more insane?

Who is she going to campaign for next? Milosevic? Pol Pot? Stalin?

I got the following email from my mate Paul:

Re: your Toynbee rant – spot on.

Why are we supposed to be so afraid of a Tory election victory anyway? Yes, a Tory government would be a disaster – but how would it differ from the current on-going disaster?

The NHS is still being slowly dismantled, and I don’t remember Gordon Brown promising to (for example) re-nationalise the railways. Where are Labour’s Labour policies? What do we have to show for eight years of Labour government?

The minimum wage? Great – unless you want to pay into a pension scheme (there’s no way in hell there’ll be a State pension left when I reach retirement age). Great – unless you live in the south of England and you ever want to own property.

Even if I could do the mental gymnastics required to overlook Blairs ‘foreign policy errors’, his domestic policy record is hardly blinding, is it?

And what’s with all the moral indignation about Howard playing the race card? It wasn’t so long ago that David Blunkett was saying that refugee children were ‘swamping’ our schools, and ought to be held in detention camps…

The Labour party no longer exists, as far as I’m concerned.

Again, I ask, why the hell should we vote Labour?