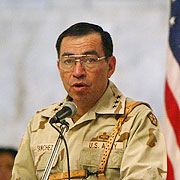 America’s leading civil liberties group has demanded an investigation into the former US military commander Iraq after a formerly classified memo revealed that he personally sanctioned a series of coercive interrogation techniques outlawed by the Geneva Conventions. The group claims that his directives were directly linked to the sort of abuses that took place at Abu Ghraib.

When he appeared last year before a Congressional committee, Lt General Ricardo Sanchez denied authorising such techniques. He has now been accused of perjury.

“We think that the techniques authorised by Gen Sanchez were certainly responsible for putting into play the sort of abuses that we saw at Abu Ghraib,” Amirit Singh, an ACLU lawyer, told The Independent on Sunday. “And it does not just stop with Sanchez. It goes to [Defence Secretary Donald] Rumsfeld, who wrote memos authorising these sorts of techniques at Guantanamo Bay.”

In the September 2003 memo, Gen Sanchez authorised the use of 29 techniques for interrogating prisoners being held by the US. These included stress positions, “yelling, loud music and light control” as well as the use of muzzled military dogs in order to “exploit Arab fear of dogs”. Some of the most notorious photographs to emerge from the Abu Ghraib scandal showed hand-cuffed, naked Iraqi prisoners cowering from snarling dogs.
(Source: The Independent)

So, let me get this straight…

We must support Bush and Blair’s crusade against terrorism because these evil Islamists want to destroy our Western society? They want to remove our basic civil liberties, bomb our cities, torture us and shoot our children dead in the streets?

Surely this is exactly what the US and UK are doing in Iraq?

Here you have the commander of all US military forces in Iraq telling his troops to torture innocent civilians. Why do I say innocent civilians? Because none of the “insurgents” ever held by US forces received any form of legal trial or counsel. They were simply abducted by US stormtroopers and banged into prisons where they were tortured, often to death.

These values, abduction, terror, torture are the core values of the US military and its top commanders. These values are the values of Cheney, Rumsfeld, Wolfowitz and the rest of the PNAC neo-Nazis.

These are the values of George W. Bush and Tony Blair.