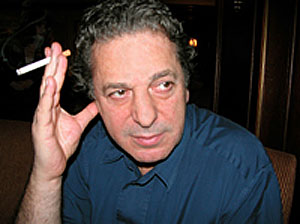 Charles Saatchi, the adman who was responsible for Margaret Thatcher raping Britain

For about two days, I had a little link to my EMI album on iTunes. But it felt wrong. If people want to buy my music, I think they can find it easily enough without my shepherding.

Neither do I have affiliate links to Amazon for any records or books I review. If I did, how could you trust I wasn’t giving a favourable review to something just to get some money from Amazon’s sale? I could probably make a bit of money since this site is quite popular (last month I had 7461 unique visitors).

I think advertising is one of the most pernicious, dementing forces in modern capitalist society. Whether it’s eating disorders or crippling credit card debts, you can usually trace the initial push to destruction back to a glossy ad image or slogan.

You can’t sell unless you make people think they need to buy the product. You have to make them feel too fat, too ugly, too un-stylish, too un-cool. You present them with the solution to their problems: your glistening product. You create the need for the product, it’s not simply informing consumers about a new choice they have.

If you’re reading the above and disagreeing violently, you’ve probably got a well-paid job in advertising / marketing and thus have already been lost to the Dark Side. Sorry, that was your one life, selling eco-destroying shit to people who didn’t need it and couldn’t afford it. Well done. Don’t worry about me, take consolation in your immaculately housed collection of fashionable conceptual art.

Advertising is reverse Buddhism: it insists you cannot be happy unless you invest more and more into the material world and possessions.

What sells smoking to children? Advertising.

What makes most women think they’re fat and need to buy something to be thinner? Advertising.

But the nature of capitalism is that a business has to turn a profit to survive. I can’t see how such a company could stay afloat unless it had other sources of revenue.

The internet is becoming increasingly clogged with advertising. Flashing banner ads, popups, popunders, spam, spim, all of it destroying the greatest communication invention since the printing press. The most annoying ad-sourced offender? Flash. Inevitably, sites that have been “designed” by glossy, expensive agencies always use crappy Flash that takes ten minutes to load and is a bag of trendy wank when it appears.

You won’t ever see any of that shite on Bzangy. It will always be pure content, nothing else.

I make my money from music, writing and photography. I won’t ever make it from advertising on Bzangy.

It’s been pointed out to me by several sarky emailers that Bzangy itself is merely one long advert for me as a person. And that maybe promotes my music. And every single review I do on here, even though they’re all unpaid, is still advertising for the band/author/gadget company. And my music has been used on TV ads in the past.

All I know is this: if Coca Cola offered me a gzillion quid to use my music in an advert, I’d say no (not that they would but bear with me).

But if Greenpeace wanted to use my music in an ad, I’d be hugely flattered and let them have it for nowt.

Maybe I don’t actually hate all advertising, maybe I just hate the vast majority of what advertising promotes?

To be honest, I’m confused. Is it evil to use a basically evil process (advertising) to promote something good? Does the end justify the means?

I haven’t got a fucking clue. I guess I’ll have to go with my gut feeling on ads rather than my befuddled head.