Elizabeth Wilmshurst, deputy legal adviser to the Foreign Office, resigned in March 2003 because she did not believe the war with Iraq was legal. Her letter was released by the Foreign Office to the BBC News website under the Freedom of Information Act.

1. I regret that I cannot agree that it is lawful to use force against Iraq without a second Security Council resolution to revive the authorisation given in SCR 678. I do not need to set out my reasoning; you are aware of it.

My views accord with the advice that has been given consistently in this office before and after the adoption of UN security council resolution 1441 and with what the attorney general gave us to understand was his view prior to his letter of 7 March. (The view expressed in that letter has of course changed again into what is now the official line.)

I cannot in conscience go along with advice – within the Office or to the public or Parliament – which asserts the legitimacy of military action without such a resolution, particularly since an unlawful use of force on such a scale amounts to the crime of aggression; nor can I agree with such action in circumstances which are so detrimental to the international order and the rule of law.

2. I therefore need to leave the Office: my views on the legitimacy of the action in Iraq would not make it possible for me to continue my role as a Deputy Legal Adviser or my work more generally.

For example in the context of the International Criminal Court, negotiations on the crime of aggression begin again this year.

I am therefore discussing with Alan Charlton whether I may take approved early retirement. In case that is not possible this letter should be taken as constituting notice of my resignation.

3. I joined the Office in 1974. It has been a privilege to work here. I leave with very great sadness.

If only Butcher Blair, the self-proclaimed pious Christian, had one-hundredth the decency and compassion of Elizabeth Wilmshurst, perhaps there wouldn’t be 100,000+ Iraqis dead now?

Blair misled Britain, lied to Parliament and thus involved us in an illegal invasion of a non-agressor country.

And still the fucker keeps smiling…

Since Saturday, I’ve been laid low by lurgy, specifically ‘flu.

Like most men, I’m a terrible patient and Ele’s had to put up with a lot of whimpering, mewling and general ‘take care of me’ whimsy.

I suspect I caught it in the viral gang-bang that is central London, probably on the demo. I’m afraid I’ve been very dull and caught ‘flu at the end of the season:

The illness even has its own season – from November to April, with most cases occurring between late December and early March.
(Source: KidsHealth)

So far, I’ve had these symptoms:

Thankfully I’ve not had any vomiting or diarrhea, though I did have a bit of delerium, which was horrible. And a lot of bone ache. I can feel the inside of my shoulder bones when I move my arms. It’s most disconcerting.

At the same time, I do find it fascinating that inside my body, there’s a bitter war going on. My body is now pumping out antibodies tailored to the specific virus that’s invaded it. Pretty marvellous, really. 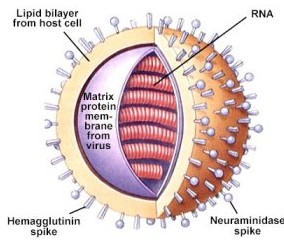 But the virus itself is quite amazing. Such a tiny scrap, a few bunches of RNA, and it can cause such disruption (millions of deaths) just by carrying out the only form of reproduction it can: hijacking animals’ cells and getting them to make its babies.

For your listening pleasure, I’ve made a little recording of my current respiratory state:

Hope you like it. Maybe I should put a funky backbeat underneath it or something? Could be a hit!

I’m looking forward to getting better and gambolling in the sunshine once more, like a tubby lambkin.