Philippe Sands, a QC in Cherie Blair’s Matrix chambers and a professor of international law at University College London, claims in his book Lawless World that Lord Goldsmith warned Mr Blair in a document on 7 March 2003 that the use of force against Iraq could be illegal. Mr Sands wrote: “So concerned was the Government about the possibility of such a case that it took steps to put together a legal team to prepare for possible international litigation.”

The Government has refused to publish the 7 March document.
(Source: The Independent)

Blair parades around, waffling on about peace, democracy and terrorism when all the time he’s a war criminal. He pushed Britain into an illegal attack on a country which had never and has never attacked Britain.

How frequently do you post?
I currently have a goal of posting 25 posts per day 7 days per week. Of course this is across 17 blogs, some of which I post multiple posts per day, others I would only post on a couple of times per week. I don’t always meet this goal (although some days when I’m on a roll I can do much more than that) but its what I aim for. I figure if I want to make a full time living from blogging then I need to put significant levels of effort into it. If I post for a full year at this rate I’ll have added 9125 pages which gives every opportunity for someone to find it using search engines.
(Source: Buzz Marketing)

Bloody hell! Twenty-five posts a day! I’m a gobshite and I can’t imagine doing ten posts in one day, let alone that number.

I know this bloke makes his living from blogging but I can’t help but think he’d be better paid in print journalism. And perhaps have more spare time away from the computer?

Demonstrators pulled a float portraying a prisoner being beaten at Iraq’s Abu Ghraib prison through the German city of Mainz on Wednesday, part of a protest by several thousand people against visiting United States President George Bush. 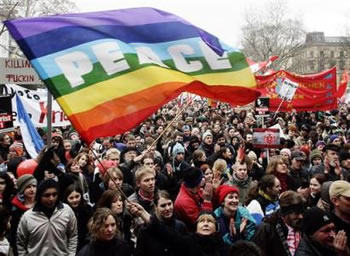 A demonstrator waves a peace-flag during a protest rally against the visit of U.S. President George W. Bush in Mainz, western Germany, on Wednesday, Feb. 23, 2005. (AP Photo/Fabian Bimmer)

The float featured a woman in military fatigues whipping a “prisoner” in an orange jumpsuit — a replication of abuse by US troops at the Baghdad prison. Also among the marchers were four people in brown cow costumes bearing a sign: “We don’t need you, cowboy.”
(Source: Common Dreams)

Bush’s stupid, dunce’s grimace has been all over the telly the last few days. The TV news coverage has been uniformly sycophantic and glowing, trying to paint the fundamentalist nutter as a world statesman rather than the confused puppet of PNAC.

But anyone who’s seen the footage of him being told about the WTC attacks in Fahrenheit 911 knows that Bush is about as decisive and commanding as a hamster. He’s not even as good an actor as Reagan was. And never did I think I’d be comparing Rockin’ Ron favourably to another US President.

The mass media is trying to make Iraq go away. But now, more than ever, it throws the world political situation into sharp relief. The Iraqis voted for a timetable for the withdrawal of all occupation forces. Has that been drawn up? Is there a true handover of power under way in Iraq or will the US retain a huge military presence there?

In world terms, what is the US up to? Its military bases girdle the globe, threatening “rogue nations” while carrying out its own rogue policies:

At a news conference Thursday, Bush demanded that Syria end its occupation of Lebanon but he stopped short of accusing Syria of assassinating former Lebanese Prime Minister Rafik Hariri. An investigation to assign blame is under way.

It would also help if Bush were to practice what he preaches. His orders to Syria might carry more weight if the United States were not occupying Iraq, digging in for the long haul with reported plans for more than a dozen permanent military bases there.

He also is denouncing Iran and North Korea for nuclear arms while the United States is studying a new generation of nuclear battlefield weapons and bunker busters.
(Source: Seattle Post Intelligencer)

That’s why seeing the news about the German protest is so heartening. Why isn’t it all over the telly? It isn’t even on the BBC News website. Yep, I found it. But I had to search.

Look at the coverage of Bush and Blair currently on TV. It’s clear that the mass media is only interested in showing us one side of the story. Doesn’t anyone find it ironic that the government complaining about Korea’s nuclear weapons is simultaneously trying to increase its own stockpile? And that country is also the only country in history to have used nuclear weapons in combat.

And who’s got his finger on the button? George W. Bush. A man who believes he’s personally guided and protected by god. 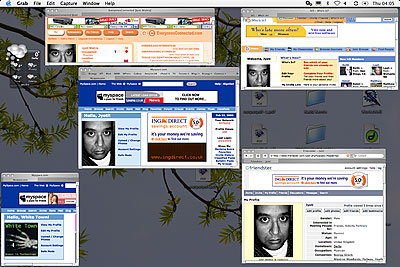 In the above piccy, you can see all the social neworking sites I’m currently on. Two MySpace profiles (one for me, one for my band), Everyone’s Connected, Friendster and, lately, Hi 5.

I’m beginning to wonder what the point of these sites is. Every few months a new one will come along, there’ll be flurry of people joining, inviting their mates on and then, inevitably, the site will slowdown to the point of uselessness. Then people will stop using it and… wait for the next one to start.

So far, the only people I’ve added to my personal profiles are people I know in “real life” anyway. I haven’t got to “meet” one person I didn’t already know. I’m guessing it’s because people basically keep to themselves. So, unless your profile shot features some gratuitous nudity or you’re a teenage girl, people won’t just add you out of the blue.

Each site has its good points. Friendster was fun for a while, before it started running like a sloth through molasses. Everyone’s Connected has some fancy pseudo-newspaper features (instead of bulletins) plus you can see who’s been looking at your profile. MySpace is fun because it’s possible to spend hours browsing through photos of naked women and pretend they actually represent the person who posted them. And yes, I mean you, hairy old bloke pretending to be Lindsay Lohan.

Maybe it’s my grumpy pic putting people off but it was either that one or my Boss Nass image. Perhaps I’d get some adds if I got my hair emoed up, pushed my boobs together and gazed into my webcam alluringly?

Right, I’m off to check if anyone’s added me… 🙂