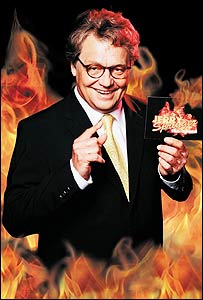 A cancer charity has refused a donation from Jerry Springer – The Opera after a religious group threatened to protest.

Christian Voice said it had warned the charity that accepting cash from a show full of “filth and blasphemy” would be a public relations disaster.
(Source: BBC News)

Can you believe it? A group who allegedly follow the god of love and forgiveness stop a cancer charity receiving money? And how exactly did they win over the charity to their point of view? Was it by patient discussion and the application of the lessons of scripture? No.

Stephen Green, from Christian Voice, said the charity had made a decision to “honour the Christian faith”, describing it as a “beacon of excellence”.

“They were in grave risk of alienating Christian donors, their staff and cancer patients,” he told Radio 4’s Today programme.

He admitted his group threatened to protest outside the cancer charities’ offices had they accepted the donation.
(Source: BBC News)

In other words, if the charity had accepted the money, these “Christians” would have bullied any other followers of their faith away from donating. Never mind the people dying of cancer. What do they matter?

Because of this religious group’s insane belief in ghosties and goblins, victims of cancer are now being denied £3,000 of aid.

And people wonder why organised religion in Britain is losing followers every day. It’s not surprising with bullyboy idiots like this in the fold… 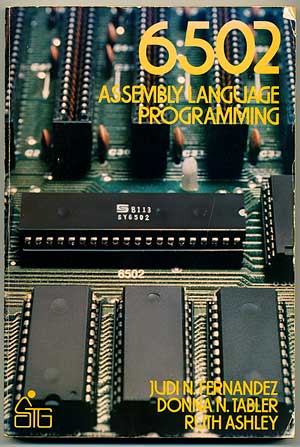 When I was tidying up earlier, I came across this book. I remember unpacking it when we moved in but I’ve not looked at it properly in years. Maybe decades?

Looking inside the front cover, I bought it on the 28th of April, 1983. I actually remember buying it, I was excited because I wanted to delve into assembly language on both my Dad’s Apple ][e (and maybe any BBC micros I came across).

I think you can pretty much tell how much of a teenage geek I was at 16 by my choice of leisure reading matter. I was fascinated by computers and although I already had a fairly good grasp of Beginner’s All-purpose Symbolic Instruction Code, I wanted to get down to the nitty-gritty and, apart from twiddling with ferrite cores, 6502 assembler was the nittiest-grittiest path on offer.

I got quite handy with assembler. I wrote a little drum machine program for the Apple and even a very rudimentary word processor. Bear in mind when I say ‘rudimentary,’ you should probably hear ‘magnificently spaghettified kludge of uselessness.’ I don’t think WordStar had anything to worry about.

Looking through the book, I missed my programming days. I gave up eventually because my crapness at maths became too crippling. I remember the exact time: I’d just finished writing a little program to map a BBC Micro keyboard into the equivalent of a musical keyboard. I was quite pleased, the main subroutine was quite short. Then the lad next to me, a proper maths whizz, showed me his equivalent code and it was about half as long. He’d solved the pitch values mathematically whereas I’d just gone at it with arrays. His program was a fine pair of gold tweezers whereas mine was a rusty sledgehammer.

Nowadays, my geekiness is limited to tweaking. I can follow reasonably simple PHP but anything truly hardcore loses me. Even my hexadecimal has gone quite rusty. And I can only remember powers of 2 accurately up to 65,536. Useless!

The book’s pages are yellowed with age now and I had to be careful I didn’t break the spine when I was scanning the inside. As I flicked through, I noticed there were tests all through the book, like this one: 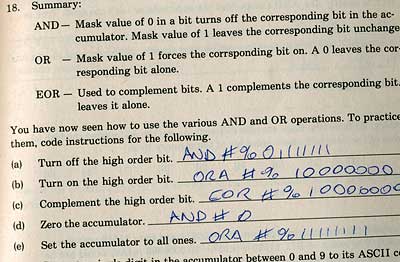 One thing hasn’t changed in the last 22 years – my handwriting is still shite.