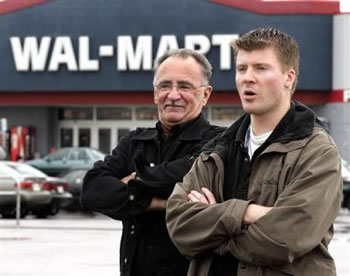 Wal-Mart Stores Inc. says it will close one of its Canadian stores, just as some 200 workers at the location are near winning the first-ever union contract from the world’s largest retailer.

“Wal-Mart has fired these workers not because the store was losing money but because the workers exercised their right to join a union,” Michael J. Fraser, national director of UFCW Canada, said in a written statement. “Once again, Wal-Mart has decided it is above the law and that the only rules that count are their rules.”
(Source: Common Dreams)

So now good-old Asda is really bad-old Wal-Mart, do I really want to give my money to a company that’s notorious for its anti-union aggressiveness? After all, the above incident is just part of the larger Wal-Mart attack against the basic human right to collective representation:

The closest a U.S. union has ever come to winning a battle with Bentonville, Ark.-based company occurred in 2000 at a store in Jacksonville, Texas, where 11 workers in the store’s meatpacking department voted to join and be represented by the UFCW.

That effort failed when Wal-Mart eliminated the job of meatcutter companywide, and shifted from in-store meatcutting to stocking only pre-wrapped meat.
(Source: Common Dreams)

If you buy Asda Wal-Mart products, you’re supporting a company that deliberately derails unionisation in order to keep paying its workers the lowest wages possible. Hence, bigger profits for them and marginally lower prices for you.

Is that tiny difference worth it? It may be a few pence to you but it comes from the exploitation of union-less, and therefore powerless, workers.

It’s your money, your choice.

Me? I guess I’ll have to shop elesewhere unless and until Wal-Mart stops its anti-democratic practices.