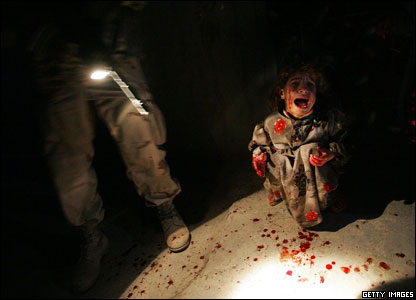 It’s of a little Iraqi girl. Her parents have just been murdered, shot dead by US soldiers. Their crime? Failing to stop at a roadblock. Maybe you’re asking, ‘why didn’t they stop?’ I don’t know. Maybe they were scared of getting hauled off to Abu Ghraib and tortured to death like their fellow countrymen. Maybe it was too dark for them to see the hand signals. As for the warning shots, we’ve only got the US military’s word they were fired and we know how honest they are.

All I ask is that you put yourself in that Iraqi family’s position. Your country has been invaded by the most powerful military in the world, representing a president who you know hates your religion. It’s bombed your country flat, letting chaos ensue, whilst securing all the oil facilities. Both its troops and troops of its ally, the UK, torture and beat your countrymen to death, with impunity.

The soliders carrying out the torture say they’re only following orders, just like the Nazis used to.

Their superiors say no such orders were issued. It seems no-one is to blame for these war crimes. Meanwhile, your life is worth nothing to these defenders of truth and justice. They can riddle your car with bullets, injuring your children and killing you. Your little girl screams as she looks at your blood on her hands.

The statement also said that military officials extended their condolences for this “unfortunate incident” and were investigating.
(Source: BBC News)

This story wasn’t on the TV news. Why bother? It’s just the daily reality of a country under a brutal occupation my torturing, murdering invaders. This occupation is our fault. If we protest enough, if we march enough and campaign enough, we can stop it. The question is, can we be bothered?

Here’s the source of the above photo: Tal Afar Murder